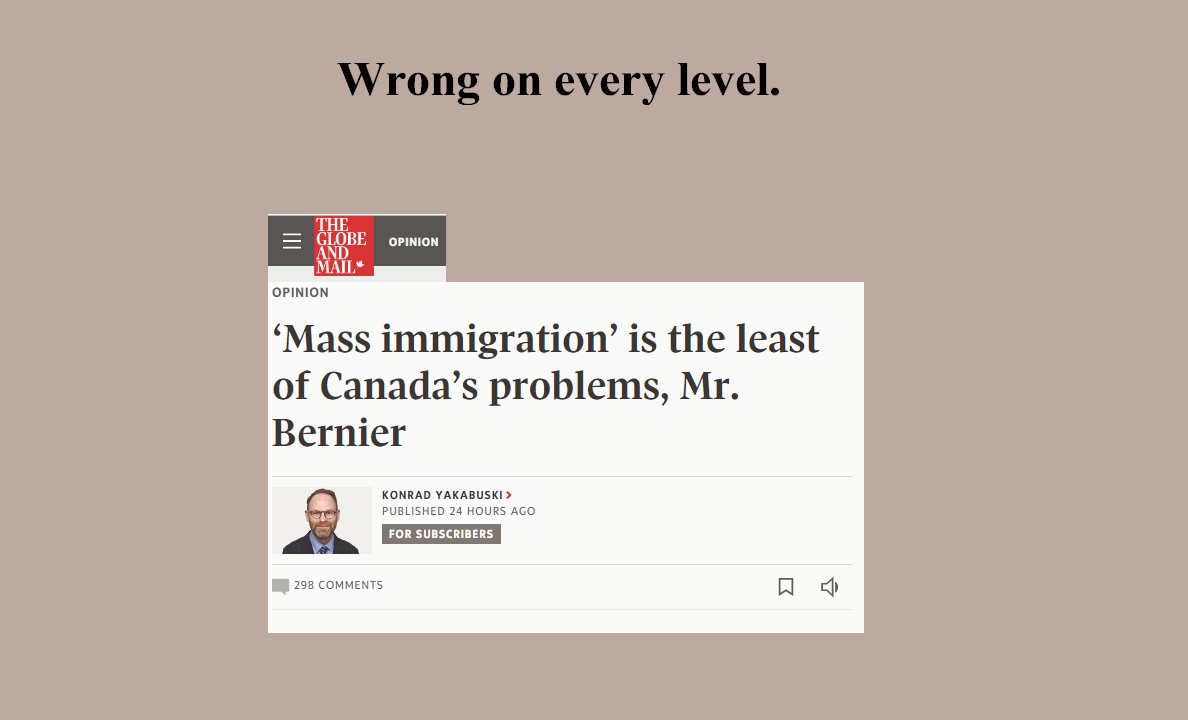 FACT CHECK:  BULL.
The liberals’ Globe and Mail division is at it again — or at least one of their liberal columnists is. This is because it is a day ending in “-day.”

This hideous, scolding headline is presented for your edification. But it is not even a good opinion:

‘Mass immigration’ is the least of Canada’s problems, Mr. Bernier

Canadians say otherwise, Mr. Yakabuski. It’s ranked lower than other issues, but it’s not “the least.” Not by far. Not on any survey. OK, so it’s actually just your opinion that it is “the least.” Fine. Not based on facts, but fine. You find alternate facts that you want to find, in other places like Canadian Centre for Policy Alternatives and Immigrants-R-Us.com. I accept that folly.

Item two: Mr. Bernier never said it was number one. He discusses scads of issues, and does it clearly. I know because I listen to other opinions and don’t live in a liberal-left news bubble, and I take the time to read his newsletter in my inbox. If Bernier’s own website is any guide, and it is, “Veterans: Standing behind the men and women who sacrificed for our country” is number one, at the top of the platform (which appears to me to be a very patriotic stance, but more on that later!). “Immigration: Reducing Overall Levels and Prioritizing Skilled Immigrants” is placed fourth, out of thirteen very well-explained platforms. I dare Mr. Yakabuski to declare in another blaring headline that “Treating Veterans right is the least of Canada’s problems, Mr. Bernier.”

Bernier doesn’t share the same opinions as Yakabuski on most or maybe even one single issue. But I find it really, really weird that in the midst of a column fuming about Bernier’s stance on immigration — immigration of all things — Yakabuski steps right into it, and calls Bernier “un-Canadian.” My eyes popped a little when I saw that gem. On Twitter they’d call what Yakabuksi did self-owning.

He insults Bernier as if he were someone from outside Canada wanting in but being unworthy just because of his political opinion. And yet Bernier is — quite literally honorably as an MP — in Canada as, a Canadian. As Canadian as maple syrup.

Yakabuski chose to try to stigmatize this good Canadian, Bernier, with an ugly, intolerant moniker, simply because he doesn’t agree with his opinion. Again: this is about Bernier and immigration! He deems Bernier to be a lowly outsider — lowly being the sentiment Yakabuski means for you to perceive here when speaking of this outsider Bernier. Yakabuski casts Bernier out of our community of Canadians, because he thinks it’s the right thing to do to those with whom he disagrees politically. That sounds totalitarian and extreme and undemocratic, and well, space is limited here, it’s just not for me.

Mr. Bernier has depicted immigrants as freeloaders and a burden on taxpayers, despite reams of evidence to the contrary. It’s ugly, disingenuous and un-Canadian.

“Ugly.” You just pooped-out the real ugly there, son. “Ugly,” “un-Canadian,” and what else now? “Deplorable!” Yes, I’m not even kidding:

My guess is Mr. Bernier knows all this, too, which makes his opportunistic courting of those who don’t all the more deplorable.

If one is such an “ugly, deplorable, un-Canadian,” I presume they ought to be expelled or deported to someplace really ugly and deplorable, like, oh, I know, “Trump’s America!” I imagine that’s the place that would reflexively spring to Yakabuski’s ever-so tolerant, herd-driven mind (because, see, herd says: Trump’s a racist Nazi white supremacist, obviously). Or that Bernier should simply be eliminated from “real” “Canadian” society in some fashion. Should these “deplorables” be sent to some sort of re-education camp? Possibly liberal conversion therapy! I wonder: does Yakabuski desire some sort of mass exodus of these ugly deplorable “un-Canadians” whose opinions he deems unworthy of his endorsement — even while being pro-mass-immigration? Weird stance!

Yakabuski seems to be lacking any moderation. But that lack of a love of diversity — diversity being such a “Canadian thing,” I’m told, is rather ironic.

I’ll tell you what Yakabuski’s comments are: un-intelligent, not just because it escalates the current level of awful rhetoric and hate, and lowers the level of discourse even further, but because it hurts his own cause (this I celebrate). One left-wing Globe and Mail reader, who is obviously an ugly, deplorable, un-Canadian now, said it well: 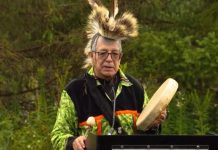