A media Hell bent on not reading things right 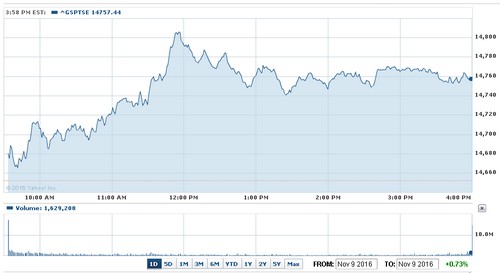 Last night the financial market elites (not individual folks) freaked out when they figured out their media got it all wrong, and Donald Trump was going to win. The cool kids were anti-Trump, because they watch CNN (or worse). The stock market futures markets were tanking. The liberal news media reported the crap out of it, feeding the fear and making it worse (which they constantly deny doing, but that’s another lie and a story for another article).

So financial channel CNBC chimed in this morning with this great investment advice:

Market to fall 6% on 'heightened volatility' due to Trump win, BofAML says https://t.co/OZtWn6QRnm via @cnbcpro

They weren’t the only ones. Lots of media reported on the inevitable collapse of the markets — due to “Trump.” Based on nothing. I think they just hoped it was true, for purely political reasons. It’s a bandwagon effect in action, and at its worst. Here’s the state-owned CBC’s effort at left-splaining financial markets (always gives me a chuckle). Note the photo of the guy looking like he’s about to jump out the window — which is so stupid given the Liberals’ new assisted suicide endorsement:

The CBC account which tried to freak us out earlier in the day, never bothered to cover the rise in the markets — not even the rise in the Toronto market which was as great.

I feel sorry for the folks who freaked out, were concerned and mislead, or even lost their shirts simply because so many liberals chose to toe to the liberal propaganda line rather than appealing to common sense and reason, and facts, enabling them to offer good, sound advice.

UPDATE: A late addition to my observations:

Media pronounces a market apocalypse yesterday and today the Dow hits all-time high. What else did hey get wrong? https://t.co/hcxzr0WllJ

Previous articleMorning in America
Next articleGov gets in way of gov, which gets in the way of people, progress, and sanity