Listen to Rush Limbaugh in Canada

Click the pic to listen (opens in a new window). 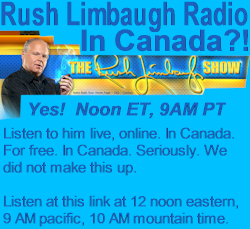 On that same link, you can also hear Brian Kilmeade Show at 6 AM Pacific (9 AM Eastern), Sean Hannity at 12 noon Pacific (3 PM Eastern), and and Mark Levin at 5 PM Pacific (8 PM Eastern).

As Canadians know, nearly all of Canada’s media companies are owned and run by liberals or progressives — or worse, owned and run by the government, much as in communist China and other socialist/communist countries — who are so liberal or leftist they don’t even know how liberal or leftist they are, anymore. They live in a left-wing bubble. They assume everybody thinks like them.

Or they do know. They are just hyper-partisan liberals and progressives who know full-well how liberal and leftist they are, and they live to pander to the liberal-left’s “wokeness,” political correctness, phony calls of racist! and sexist! and Black Lives Matter! and Islamophobe! and homophobe! and denier!, and so on, against everyone else. They don’t want to hear conservatives views, and they don’t want you to, either. In all cases, they’re just chicken and/or biased — and they’re intolerant, and they demonstrably hate diversity — so they refuse to broadcast Rush Limbaugh’s syndicated radio show, or any other conservatives from America, anywhere in Canada.

This is similar to how Canada’s establishment print or online media have all been too afraid and intolerant to present, for example, Ann Coulter’s (diverse!) opinion column, despite it being one of the most popular in America, and one of the longest-running. ProudToBeCanadian.ca was, for nine years, the only web site in Canada — and as far as we know, the only media in Canada — that has had the guts to buy Coulter’s weekly column and present it to Canadians every week. Then we doubled and tripled down, and presented several other columnists as well.

The establishment media could make a ton of money presenting these shows or columns, but they chose not to; so strong is their political activism that they pass-up revenue and profits, and in many cases risk bankruptcy, just to advance their left-wing activism. It seems to be the stuff of religious zealotry, but it is most certainly hyper-partisan political activism at play here.

I cannot explain, and nor can they, how this fits into their grand liberal “diversity” and “tolerance” strategy. It proves that they — the left — are dishonest. Once again — and this is true of virtually every accusation they level against you — what they accuse you of (“intolerance,” lacking diversity, etc) they are actually guilty of.

Fans can also subscribe to RushLimbaugh.com and then watch the broadcast live in streaming video.