Like “awesome,” “Nazi” and “fascist” have lost all true meaning -UPDATED 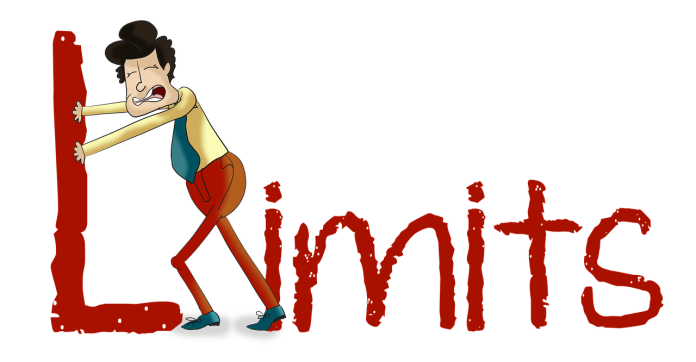 Edited and updated 15:20 PST for clarity and additional info

I’ve never not voted. I didn’t always love the choices. Sometimes I’ve “protest” voted — voted for someone knowing they weren’t going to win to show in my infinitesimally small way that I objected to any of the other more mainstream candidates, one of which was definitely going to win anyway.

Unlike those “get out the vote” campaigns (always initiated by left-wing groups and always meant to get the left-wing vote out) I’ve considered launching a don’t vote at all initiative. But of course, on reflection, it sounds just as stupid as it really is. It’s garbage advice and would result in exactly no takers other than those who don’t vote anyway (big win!).

I will die before I vote for one of the progressive parties — the Conservative Party included, if need be. Yes, I have often been loath to continue my support of the Conservative party, largely because I’m a conservative. So I’ve looked at Maxime Bernier’s People’s Party policy positions and I like every single one of them. They are all conservative principles. I’ve retweeted stuff Bernier’s tweeted, several times, because, again, they are legitimately good, salient, conservative talking points. So what’s not to like? This. This is what’s not to like: 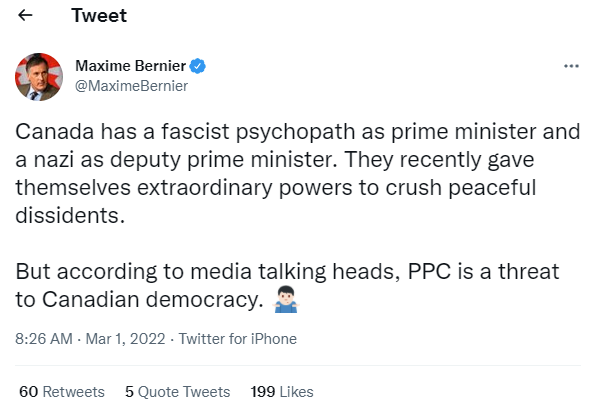 This is massively over-torqued and harmful rhetoric.

What is going on here? The pressure’s been pretty high around here lately, I grant. Or maybe I’m just getting senile at my young age and don’t see the “genius” at play — but I seem to do fine in other life tasks so I don’t think it’s that. I’ve entertained the notion that this is a new Laurentian elite political newthink invented by Gerald Butts or some other guy who’s lept off the sanity train like him, but I rejected that along with the 4-D chess theory. I don’t know if it’s some new form of political suicide, or just what the hell it is. I’m at a loss.

For the record, I do know what Bernier’s on about, because I’m cool like that. Justin Trudeau has become inarguably authoritarian, mean and nasty, bitter and angry, and has used tools reserved for actual existential threats — against mere political opposition, as even the global press has noticed and written about in the past few weeks. But I’ve come to acknowledge that calling him a “fascist” does a disservice to the recognition of actual fascists, which, as we’ve seen with the example of Vladimir Putin, is extremely important for us to be able to recognize. Particularly when we are literally in the middle of watching that real fascist — Vladimir Putin — try to take over Ukraine; and Tawain is at serious risk from communist fascist, Xi Jinping.

Trudeau is a garbage PM, but he’s not a fascist. He’s too weak and woke and effete to be a real fascist. Thank God for small mercies.

And I further understand the “Nazi” reference to Freeland that Bernier made here is based on not just her latest hysterical authoritarian pronouncements of financial revenge upon political foes, but on a recently revealed photo in which Bernier claims or implies she appears to be “standing with” (to use Trudeau’s infamous and really rather disgusting turn of phrase when he falsely accused a Jewish Conservative MP of “standing with [truckers] waving swastikas”) a group Bernier says is linked to neo-Nazis, Ukraine’s Bandera movement. Freeland is in fact shown holding a banner, but whether or not it is linked, or whether she knew what she was doing or not is another question — one I often ask about whatever she says or does! As she is someone who claims Ukrainian heritage (which the “news” media can’t stop mentioning now in their partisan effort to bolster her street cred in light of the war there), you’d think she’d know — and better than Bernier. Or the “news” media would. But we can’t trust any of them anymore, so that doesn’t help.

Here is the picture, which she posted herself and then reportedly deleted without explanation (i.e., someone clued her in?), taken on February 28, 2022 at a pro-Ukraine rally [NB: as you can imagine, there is now naturally an ongoing argument online about whether or not this is an actual neo-Nazi banner or if it simply says “glory to Ukraine,” with no other implicit meaning, full stop.): 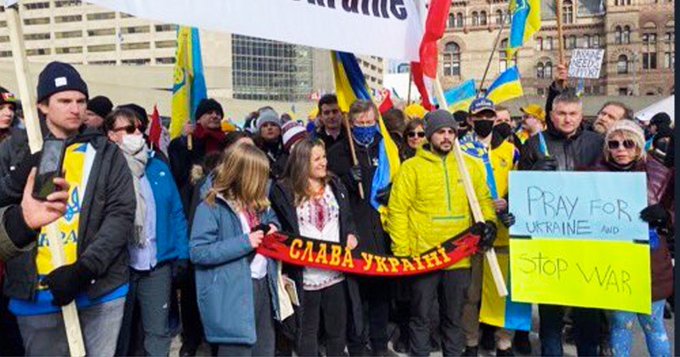 If you look at her Twitter account now, however, this is the new pic — and in case you’re not detail-oriented, note the new absence of the banner): 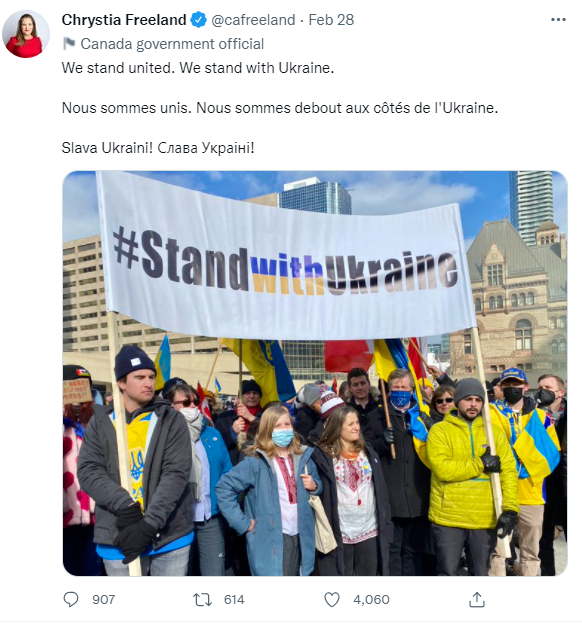 (A final note on this – with a nod to a tweet by @inklessPW who tweeted: “If you want an explainer on that banner @cafreeland was holding in her now deleted tweet – Dr. Shipley (Prof at Humber) provides some insights in this thread”. It goes a long way toward explaining this fascism link regarding that banner.)

An additional “Nazi” tie-in made by Bernier is to her grandfather being an actual Nazi — an inconvenient truth which she once tried to deny, but her denial has since been rebuked by none other than the Liberals’ Globe and Mail division) — and he adds this tidbit as if to make it (in his mind) a viable accusation, providing him with a license to come right out and call her a Nazi on Twitter. And just as calling Trudeau a “fascist” does a disservice to our important need to be able to recognize actual fascists, calling Freeland a “Nazi” does a disservice to the victims of actual Nazi atrocities in history and therefore its important understanding and ability to learn from it.

Ordering a pizza elicits a response of “awesome” by the waitress these days, leaving no words to describe a SpaceX rocket blasting off for Mars. But at least that isn’t so historically, and intellectually offensive.

What Bernier is doing here isn’t viable, or reasonable. It’s dead wrong. It’s stupid, it’s divisive, it’s over the top, and it’s a disgrace. I thought he was smarter than that.

Nobody has to coach me in the use of or over-use of adjectives to describe Trudeau and the progressive left. I’ve mastered that overuse over the twenty-five years I’ve been doing this online. So I get it. But I’m a schmuck. I am not an important rising political leader — a former foreign affairs minister in a former government and aspiring to be one again.

To be sure, Trudeau, his deputy Chrystia Freeland, and in fact his whole cabinet all sound like authoritarian, totalitarian loons from another country not of the Western democratic tradition, we shall say. The Canadian government as a whole look and sound like a cabal of, well, woke authoritarian idiots, at this point. Certainly not “awesome!” But let’s just leave it at that.

I get that Trudeau is to blame that the rules have been reset this low. He is the one who has so lowered the bar — and his trusty “news” media have obediently joined him in this disgrace. Trudeau and the “news” media just two weeks ago used their own equally idiotic, divisive, totally dishonest and outright lying rhetoric in which they implied or literally called regular Canadians — Canadians truckers and their supporters — racists, misogynists, Nazis, violent, white supremacists, swastica-waving, homophobic, transphobic with unacceptable views, and God knows what else, in public addresses and news conferences, in Parliament, and thus all over our newspapers and TV and online. But the expression “don’t become what you hate” works here I think.

Maybe Bernier will delete the tweets just as Freeland deleted her photo. People make mistakes. For my part, I’m going to rethink the way I write, and the way I vote. It’s gonna be awesome.

UPDATE 15:39 PST –
At the risk of making this the world’s longest article, I feel it is incumbent upon me to note that it appears Mr. Bernier has walked back his earlier remarks now. Here’s his latest tweet, which is the one I wish he started and ended with. He’s not wrong, here: 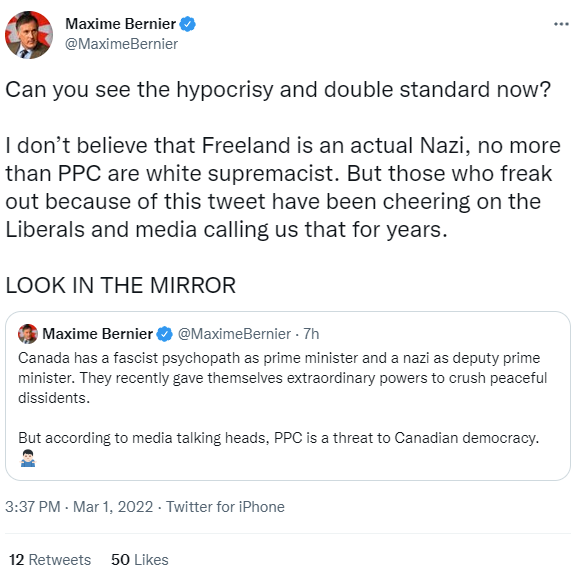