Yesterday I posted a patented “Quick Take” regarding a newspaper article about a gas station that lowered its gas prices was deemed, by that action alone, to be involved in “shenanigans” — right in the headline (“Gas station ‘shenanigans’ reason for wild price differences in Vancouver“).

See, raising prices is, we’re told by leftists and assorted progressives, the “evils of capitalism;” and lowering them, why that’s “business shenanigans.”

You can read my post here, but I also posted my comments at the newspaper article itself at the Vancouver Sun website. Naturally a leftist troll responded there with pithy nonsense, to wit (also see the screen capture of the exchange below, at article bottom):

Mihiro Sukezane
updated 18 hours ago
Reply to @Joel Johannesen: I imagine you own a MAGA hat and you and your missionaries support white OJ.

The “MAGA hat” reference is funny because they say it like it’s an insult, but I’d love to have a MAGA hat. It’s meant to be pure political bigotry, the purpose being to indicate his hatred toward a huge group of people based on their politics (also see Hillary’s “deplorables”). “Missionaries” is a bigoted remark which smugly and casually denigrates Christians, but also, somehow, capitalists or oil companies, I’m not sure which, and since he’s a leftist, maybe it’s all of them. “White OJ” is racial to be sure, if not outright racist, and is a garbage reference to Donald Trump; but it also indicates to me a measure of severe mental immaturity or drug use.

UPDATE: Even as I was about to post this, I notice the Sun seems to have removed the troll’s reply to my comments.

COINCIDENTALLY…
I read a great piece this morning by Dennis Prager:

Here’s a screenshot of the actual exchange. And this is why we take screenshots, as it seems the troll’s comments have been removed. 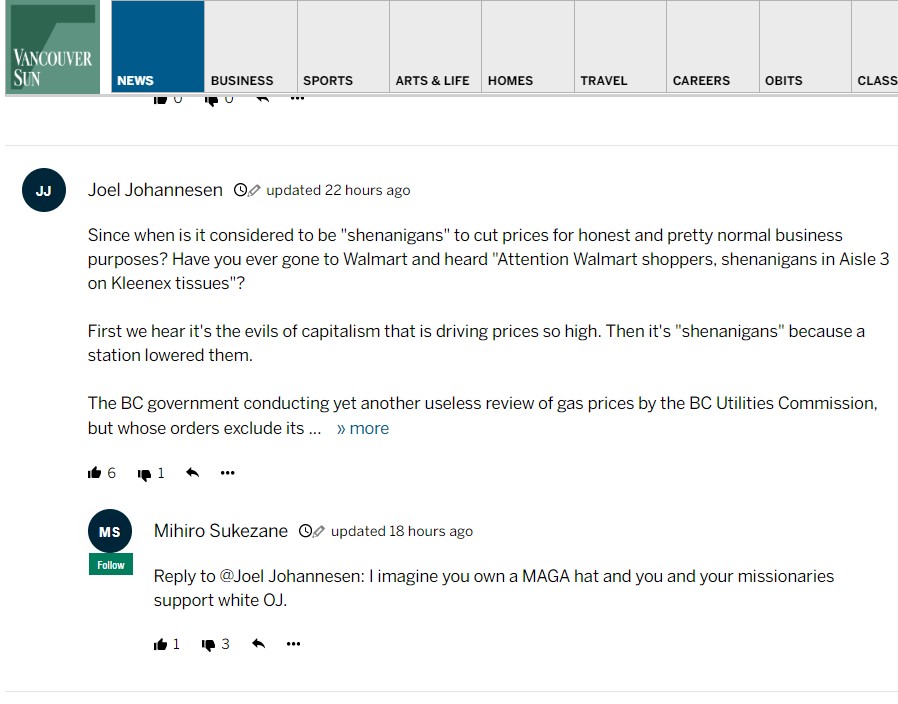 Joel Johannesen
updated 23 hours ago
Since when is it considered to be “shenanigans” to cut prices for honest and pretty normal business purposes? Have you ever gone to Walmart and heard “Attention Walmart shoppers, shenanigans in Aisle 3 on Kleenex tissues”?

First we hear it’s the evils of capitalism that is driving prices so high. Then it’s “shenanigans” because a station lowered them.

The BC government conducting yet another useless review of gas prices by the BC Utilities Commission, but whose orders exclude its investigators from making any references to how any government policies or taxes might be affecting the price, is literally “shenanigans.” So are threats to have the government set the prices — a practice better known as “socialist shenanigans.” « less