It’s not up to us, mere elected representantives of our country

Democracy has nothing to do with it (Canada).  It’s up to the liberal-leftist political elites who think right, er, left, designated and appointed to the politburo by Liberals.  They make the decisions.  Our hands are tied.  Sorry.  Better luck in some other country. 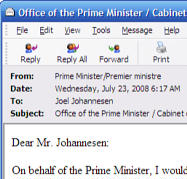 On behalf of the Prime Minister, I would like to acknowledge receipt of your recent correspondence regarding the Order of Canada.  We have noted your concern and are pleased to have this opportunity to respond.

The Government is not involved in either the deliberations or decisions with respect to which individuals are appointed to the Order of Canada.  It is Rideau Hall that approves the final appointments based on the recommendations of the Advisory Council of the Order of Canada, which is chaired by the Chief Justice of the Supreme Court of Canada.

With respect to specific appointments to the Order, the Prime Minister’s preference is for the Order of Canada to be an honour that unifies and brings Canadians together.  Clearly, this appointment did not do that.

To further express your concerns, we would recommend that you contact the Governor General’s office directly at:

Once again, thank you for taking the time to write.

I understand there is the possibility of the abortionist Henry Morgentaler surreptitiously getting awarded the honor of the Order of Canada on July 1.  (http://proudtobecanadian.ca/8932/)

I believe this would be among the most egregious mistakes and most dishonorable milestones this country has ever known.  I strongly urge you to use whatever means are at your disposal to prevent this atrocious act from taking place.

NOTE:  I did write the Governor-General.  No response.  Of course, she was promoted to G-G from her job at the CBC, and they don’t like me much…

Campaign Life Coalition commissioned possibly the largest poll ever undertaken in Canada on the matter of abortion.  ”…  [O]ne the largest, if not the largest ever, Canadian polls on an abortion related issue. It paid a professional polling company to contact over 150,000 Canadian households and ask their view on the Order of Canada award to Canada’s number one abortionist. It wanted absolute certainty about where Canadians stood on the issue. …”  The plain and simple question they asked is typed below.

July 22, 2008 (LifeSiteNews.com) – A random telephone poll of Canadian households with 13,324 respondents conducted between July 17-21, 2008 has revealed that 55.8% of Canadians oppose the awarding of the Order of Canada to abortionist Henry Morgentaler.

The national poll commissioned by Campaign Life Coalition (CLC) and just completed, by KLRVU polling has a 95% confidence level and a margin of error of 1.5%. The data is accurate 19 times out of 20. A breakdown of votes by province is provided.

The Question: “Do you believe abortionist Henry Morgentaler deserves the Order of Canada Press 1 for Yes Press 2 for No”

Previous article
Dreams from Obama
Next article
Have Our Leaders Lost Their Minds?