The Canada Day long weekend was warm and sunny, which of course meant that the “climate emergency” was feverishly at work, according to some of my otherwise fine in-laws. Of course that didn’t stop them from driving over to the barbeque party instead of taking the bus or the donkey, to eat processed meats off the gas-fired grill, using plastic utensils, while drinking non-river water.

Others among us were not alarmed about the warmth. The warm weather meant to us that it was a July weekend.

But is it warmer these last few Julys than, say a decade or two before?

Obviously! say the alarmists. Why, you can just feel it! And the earth isn’t flat ya know!

But I asked her if she really, honestly, noticed it being warmer these last few years. She fudged, but certainly the implication was “yes.” I scientifically detected a confirmation bias and bull emergency.

So this week I looked up the stats. And here’s what I found: the temperature has been remarkably, amazingly, steady, since they started keeping records. And this is data from Alarmist-In-Chief Catherine McKenna’s Environment Canada — sorry, Environment and Climate Change Canada.

But now they’re more “extreme” than in the past, so air conditioning! No, they aren’t. In fact to me they look less extreme than in earlier decades.

How could anybody from around here honestly tell me they notice a temperature rise? The chart is literally a picture of stability and consistency. If you’re feeling warmer these days, it would have to be because of a hormone emergency, or because of a you’re wearing heavier clothes emergency, because there just isn’t an environmental temperature rise that a human could possibly detect.

People are installing air conditioning more these days. A/C is a lot cheaper and more readily available now, thanks to — dare I say it and wreck another of their theories? — capitalism. And A/C is way easier to install and get installed (same reason). And standards of living have gone up over the decades (same reason). And energy is cheap enough that people figure it’s worth it to install A/C when building, or doing a reno (same reason).

The only thing that’s increasing around here is the brazen nonsense. 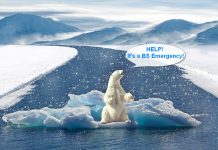