Hey is the CBC “thinly-veiled socialism”? Asking for a friend.

That was my perfectly reasonable response, tweeted on my own dime, to this craptweet from the state-owned, taxpayer-funded, socialism-reliant, and generally dreadful CBC this morning:

Rob Ford will not attend World Pride. Is that just "the way he is" or "thinly-veiled homophobia"? http://t.co/gcQAeAiL1Y #TOpoli

Yes that is an example of how the god-awful CBC spreads the love and unites the country. In my world, you’d have to be high on crack to tweet that out on one of the state-owned news media’s official Twitter accounts.

The CBC actually seems to have taken to labeling people on what I imagine to be their enemies list, with horrible idiot-culture-derived names, now.

Oh they’re shifty, though. They do it by inserting quotes and form it as a question, in order to appear as though they’re simply the honest brokers asking a question. But since I’m not high on crack, I don’t believe for a second that they weren’t brazenly trying to get people to cotton onto the idea that Rob Ford is a so-called “homophobe.”

Toronto councillor Shelley Carroll is the one quoted by the ever fair and balanced and objective CBC in the first draft of their ridiculous “news story,” and extending it to their tweet. Thus the furtive CBC was able to put quote-marks around her smear, giving the CBC cover.

Carroll’s been rumored to be mounting a run in the next mayoral election (whadoyaknow!).

Their “news story” isn’t a news story at all, but rather an excuse to call Rob Ford a “homophobe,” by quoting his political opponents instead of doing it themselves.  And apparently no supportive point of view was available to the CBC and their intrepid journalists at press time (which on the internet is anytime, but hey look! There’s a squirrel!).

Insinuating that someone may be a “homophobe,” and building that “argument” simply on the basis that the guy isn’t going to appear to embrace a horrible gay pride parade, is as intellectually weak as it comes. And according to the story, Carroll did construct that “argument” based on the singular fact that Ford wasn’t going to the gay parade. See the snippet of the CBC “news story” below.

(Ironically, and hilariously, Carroll can be found in an earlier story at the National Post, complaining about Rob Ford spending too much time outside of city hall, and not enough time indoors at his office doing the people’s business.)

Gratuitously calling someone a “homophobe” in the way most people do these days is one of the laziest, most intellectually dishonest, vitriolic, vacuous, hateful, intolerant, and actually vicious “arguments” of our time.  That term belongs in the same heap as “Israel apartheid,” which coincidentally is one of the main causes that many Toronto gay pride paraders have infamously embraced in the past.

But let’s look at the evolution of the CBC’s perfidy: In the CBC.ca’s first draft of the story (“Last Updated: Feb 06, 2014 11:33 AM ET”), there was no balance whatsoever. They didn’t appear to want any more than Shelley Carroll’s yummy “thinly-veiled homophobia” quote, because that was how they left it. That was how they ended their “news story.” Here’s the headline and a graphic of how the article concluded, including the handy links to share the smear the world over:

And yeah go ahead and note that “queer” sub-head of theirs!  “Mayor skipping out on queer parade again”.  I’d have gone another way, myself.

Next, in an update to their shoddy reporting (“Last Updated: Feb 06, 2014 12:52 PM ET”)  —  possibly after complaints from first-year journalism students or any number of sane and sober people, they finally managed to get a supportive quote to tack onto their new improved “news story” ending, from none other than… his notoriously loving and loyal brother, Councillor Doug Ford, whom you would totally expect to stand up for him.  Doug ever so shockingly stuck up for his brother, and said Rob Ford is not, in fact, a “homophobe.” Naturally, though, nobody else on Earth who was credible was available for a comment as to the veracity of the CBC’s alleged “homophobia” caper. 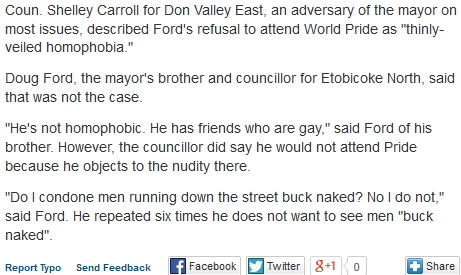 Notice that snarky last sentence? Yeah you did.

In yet another update (“Last Updated: Feb 06, 2014 4:00 PM ET”), possibly after feeling more heat from normal people about the taxpayer-paid CBC’s abject bias and shoddy journalism, they changed it right up, and actually began their story with Doug Ford’s quote, although in the same sneering snark as their previous effort. (Note they also changed their headline to one making it appear as though Rob Ford was now forced to defend himself against random smears of “homophobia”  —  which of course he was in fact forced to do, thanks to the CBC which fomented it. Also note they changed that “queer” subhead, finally.)

Mayor will not attend any Pride Week events, according to sibling

And here’s the new beginning: 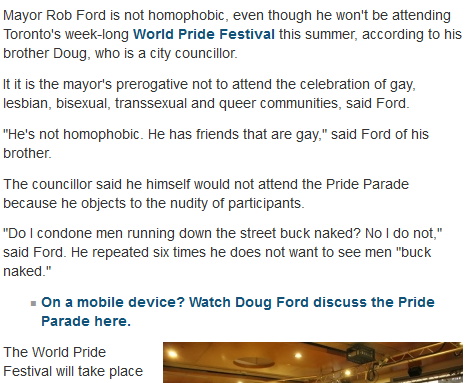 By the way, since we’re counting, how many times has the CBC repeated their myriad snarks against anything not progressive-left? More than six times? I think so. But let’s count, right?

The fact that a news media  —  any news media but particularly the state-owned CBC  —  is the culprit here, instead of some left-wing troll twerp, well that’s just crazy stupid, in

any democracy. A Canadian state-owned media practically labeling a Canadian citizen with one of the most derogatory terms imaginable today? That’s just not OK.

The CBC is already an abomination. They seem to be going for broke now, which they would already be if they weren’t sucking taxpayers’ money out of their pockets, and getting special privileges.

Even if the CBC weren’t an abomination, as a matter of principle, state-owned media should be banned in this country, and that notion should be enshrined in our constitution. And if you don’t believe that, are you worse than Hitler? I don’t know. I’m just asking a question. I heard someone ask that once.

At least I’m asking on my own dime.

Previous articleCanada’s Complicity in the US Surveillance State
Next articleUSACANADA: January 2014 job stats comparison? “U.S. has been cold!”