I mentioned environmental genius Leonardo DiCaprio’s new “factual” “documentary” called The 11th Hour (it’s so scary, see?!) about the “man-made global warming” in my J-Lines the other day. The media down south has already elevated Leo as “a smart guy” (a co-host of a CBS News show), despite his unmentioned high-school droppy-outiness.

But naturally the agenda-driving leftists at the state-run CBC are way ahead of me with their free promotion express services that are used whenever a good left-wing cause needs free promotion.  They’re all over the upcoming debut of the “factual” “documentary”.

Here’s some still-captured screen shots from CBC “News”world today, teasing the audience about their “news” coverage about the opening of the “factual” “documentary”: 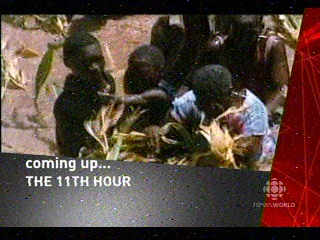 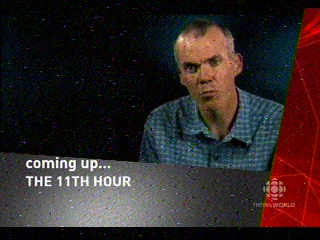 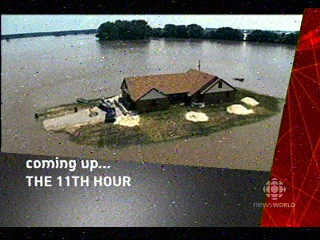 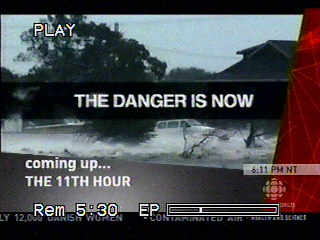 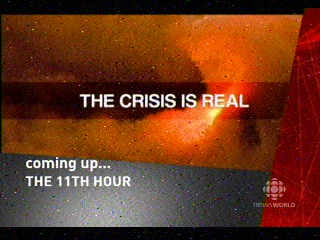 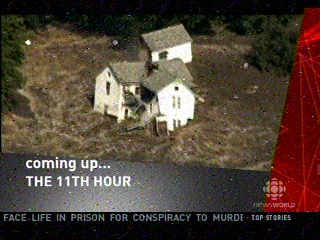 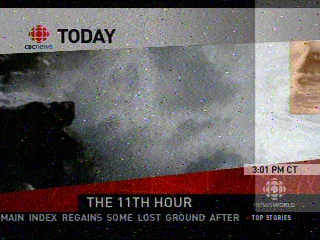 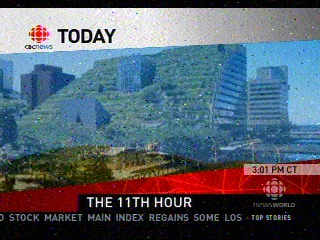 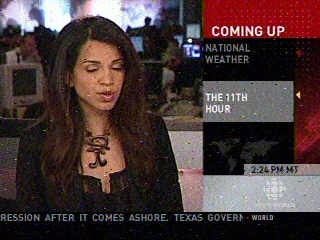 When the “review” finally came up, the “expert” “reviewer” was a guy from NOW Magazine—the magazine that I mentioned just yesterday (when they used another “expert” from them to educate us on another “fact”) which was founded by members of the Socialist League of Canada (see this blog entry).  They, of course, do not inform us of that factoid.  It’s the CBC.  It’s what they do. And how they do it.

“It’s VERY GOOD!”, the “totally objective expert” began.  Leo is “quite poetic!”,  he gushed on.  The “news” anchor, Sarika Sehgal, tossed leading puffball questions to him over and over and over, in her effort which was apparently designed to enable him—nay, to encourage him—to lecture Canadians about the “man-made global warming”, rather than actually review the movie, which they pretended was the whole point here.  But suffice it to say that the movie, as I said in my J-Lines, is PERFECT, and Canadians MUST see it.  It’s our moral duty, by golly!  I think I got that right.

So obviously it’s over to Fox News Channel now, for actual news and information, and fairness and balance, where they report, and let me decide.  A concept totally foreign to Canadians who don’t subscribe to FNC.

P.S.
They (the state-run CBC) have never promoted my web site despite its debut years ago.  Sure they’ve threatened to sue me and warn that “they’ll be watching my web site”, and what not, but no, no promotion so far.