One of these things is just like the other.  Huh.

G8 leaders strike deal to cut emissions in half by 2050

While few details of the agreement have been released, Merkel, at the G8 summit in Heiligendamm, Germany, said the goal is to cut greenhouse gas emissions in half by 2050.

Canadian Prime Minister Stephen Harper said the plan is an important step. Later back in Canada, though, the Opposition expressed skepticism.

Tory bill aimed at cutting greenhouse gases in half by 2050

The Harper government introduced on Thursday a proposed clean air act that would begin regulating smog levels by 2010 and looks to cut greenhouse gas emissions in half by 2050.

The bill sets out a number of regulation timetables for industries that emit air pollution and greenhouse gases, including the auto industry and the oil and gas sector.

“From now on, all industry sectors will have mandatory requirements and we will enforce those requirements,” she said.

Liberals are against this, and will now seek to shut down the CBC. 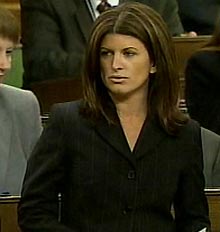