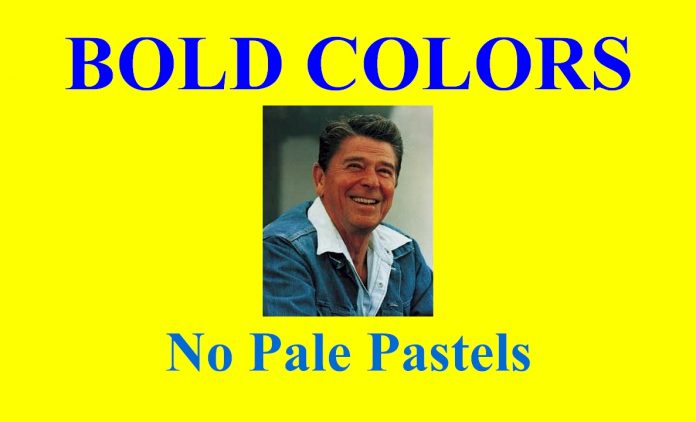 Ronald Reagan would be turning over in his grave if he watched CTV today.

According to the “experts” in the news media, what’s supposed to happen after an election is for the losing party(ies) to just stop being that party, change their principles, change the party platform at its core, and become like the party that won. That pretty much sums up the idiocy I’ve heard on the CBC and CTV news channels all day today in light of Andrew Scheer resigning as leader of the Conservatives.

The political “experts” — even the ones the CTV and CBC trot out as “Conservative” commentators or spokespeople — say that the problem is the Conservative Party isn’t in sync with progressive voters, so the Party — by which they obviously mean the erstwhile conservative folks — needs to drop all that conservative bunk (“bunk” being their principles). The conservative principles don’t line up with the Toronto folks? Poof! Change ’em! Are you still pro-life even after the media scolded you about that twenty eight thousand times? That don’t sell in Toronto-Danforth, baby (pardon the pun), so switch to pro-choice!

Craig Oliver: So I think the job of the Conservative Party now, under a new leader, is to try and recapture support in Ontario and Quebec, and in urban Canada. And that requires a sophisticated [his emphasis] national leader; someone who can take the party, and who can forge a new 21st century Conservative message. That’s what they need. Without that, they’ll lose again.

Sure, that did sound suspiciously like an elitist liberal news expert ambiguously suggesting that the venerable old Conservative policies are not only “wrong views” (you know, being conservative and all), but they’re literally unsophisticated. But let’s not get ahead of ourselves. Giving him the benefit of the doubt, I thought maybe Oliver just meant a leader who could quote Aristotle or demonstrate proper feng shui decorating techniques or something.

Luckily he was pressed on that word “sophisticated” for some weird reason that surely has nothing to do with a liberal anchor antenna picking up on a signal to encourage Oliver to expand on his hot-take for the Conservatives to abandon their unsophisticated deplorableness.

CTV News Channel anchor Todd van der Heyden: You said the word “sophisticated,” what do you mean by that?

Craig Oliver: Uh I mean somebody who has the right views on social policy for instance, that’s for sure, uh, which Mr. Scheer’s issue wasn’t that he said what he said, uh, it was that, you know, one can respect him for saying whatever he wanted, but his views were out of tune [his emphasis] with the majority of Canadians’ views! People want to vote for people who share their views. And not enough people in the country shared his views! So the Conservative Party had nowhere to go, and wasn’t about to win an election. And it was mainly because of judgements made by Mr. Scheer, and that’s what the party is making him responsible for now.

So clearly, the problem is that the “experts” are out of their minds.

What Oliver seems to mean by “sophisticated” appears to be to change your stripes from conservative to liberal, to get elected.

Pro-life? You unsophisticated rube. Dubious about the climate change cult of hysteria? You unsophisticated Greta-hater. Get with the times, man! I mean person! Change your life’s principles — not because somebody convinced you to change based on science, strong reason, or sound, convincing argument, but because it poll-tests real well in York Centre amongst the trendy millennial set, and it’s what all the academic swells in universities are saying on TV!

Presumably, the Liberals should have changed — into solid pro-life, balance-budget, and climate-change-skeptical conservatives — when Harper was elected in 2011 (with a solid majority unlike the latest Liberal semi-victory). And the NDP… well they should have dropped their entire socialist nonsense soon after they formed as a socialist party, according to Oliver who has never suggested any such thing ever because reasons. That’s the rub: Liberals should never change. Further leftists should also never change. It’s only the Conservatives who need to abort their mission if they lose an election. (And also if they win, as I understand it.)

I thought the role of leader of the party, and the members themselves, was to advocate and advance the party policies and sell the principles to other Canadians based on their soundness, and their morality, and logic, and historical record of success, etc. Not to be poll-takers or populists or stenographers for some temperamental and trendy voters. And certainly not to bend over to liberals when they lose elections. It’s about principles, I thought.

Ronald Reagan lost big before he won huge. He won by doing the exact opposite of what Craig Oliver and other experts suggest. He pleaded with conservatives in a Democratic Party-controlled America to speak, with him, of the values and soundness of traditional conservative principles, and to do it loudly and proudly. Speak in “bold colors, no pale pastels,” he exclaimed. And he practiced what he preached. And he won. And then he won again even bigger. And now he’s a legendary figure and an object lesson in how conservatives win elections.

So the Party — with all its values intact — is just fine. It can win easily. True blue conservative values and principles, contra Craig Oliver and the experts, are right, not “wrong.” They’re sophisticated, even, with all due respect to the insolent Mr. Oliver or those liberals who appear to be intolerant of conservative views. The next leader, and all conservatives, should speak of our good conservative values, and do it in bold colors — not pale pastels again — to win hearts and minds.

Previous article
Is this news, or is it propaganda? You tell me.
Next article
Globe & Mail NEWS/OPINION lines lines purposely blurred.