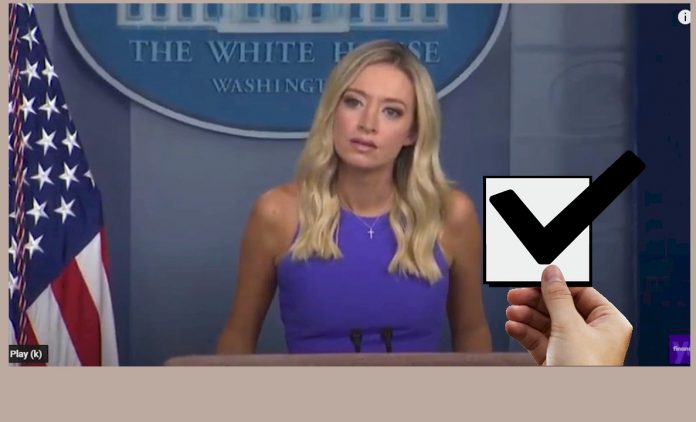 The political, social, cultural, public policy narrative has been controlled not by you or your community or our leaders or governments, but by all the wrong people. Largely by “news” media “reporters.” This lunacy must end. The new Conservative Party of Canada leader has to turn it around, and at least be the boss of the Conservative Party news.

Take a page from Newt Gingrich, and take no crap from them.

Take a page — just the one — from Donald Trump and how he manages the “news” media too, for that matter. Or if you Just. Can’t. Stomach. That, because the liberals convinced you that Orange Man Bad and you’re a total suck-up to the “woke” set as so many are, at least take a page from his outstanding press secretary, Kayleigh McEnany — the best, most effective, strongest press secretary in my lifetime, who, almost daily, provides an object lesson in how to manage the left-wing anti-conservative partisans in the “news” media. (Lesson one: be ultra prepared for every question, and turn it up to eleven.)

.@PressSec @kayleighmcenany slams @CNN for having guests on their network that openly lied to the American public about the Russian collusion narrative. pic.twitter.com/VDaXKM82LH

Why stop there? Bask in the glory that is Kayleigh McEnany as press secretary. I could watch her all day. Which is the opposite of how I feel when watching the “news” media manhandle a Conservative.

The new Conservative leader cannot continue to let the media control the agenda. And make no mistake, they have been controlling the hell out of it. And they’re doing it more and more every week. For the benefit of those of you who attended public school, the media are not entitled to do that (nor are public school teachers for that matter). They have no mandate to do that. They don’t control you. They don’t get to decide what’s important to you and us, and what isn’t. That is not their job.

Yet the “news” media “reporters” have all but killed the conservative message, and have nearly succeeded in totally “canceling” it and making it variously unspeakable, ludicrous, or have declared it to be outside of what they have deemed to be the acceptable — read progressive “woke” liberal-left — narrative. And make no mistake, their goal is just that: complete and utter cancelation of conservativism, and yes, conservatives — at least on a professional level, if not conservatives personally, including even their families. They want to shut you down, shut down your platforms, shut down your messaging, and shut down everything you stand for. And they want to allow only one narrative. Theirs. The left’s.

Why do Conservatives keep letting these partisan leftist nincompoops’ — who really don’t seem to like you very much and overtly detest what you stand for — control them and their narrative? If they think the population inherently love or even trust the news media and so conservatives should therefore be nice to them, they’d be dead wrong. Fight the lousy media when they’re wrong, which is nearly always, and your star will actually rise.

People respect strength. What voters don’t respect is a weasel. They look askance at a weak person obviously trying to appeal to the media by playing nice-nice with them and trying to lick their face. They immediately disrespect a leader who can’t answer a question properly and forcefully and with great conviction — especially the ones we can predict with 110% certainly will be asked. Abortion. Duh. Again: refer to Kayleigh McEnany.

But Conservative leaders seem to miss this point. They think they should appear less nasty, more agreeable to the left, more cordial and friendly or easy-to-get-along-with —as if any of that matters one whit or that it would work to their advantage. If I’m really nice to them, then they will be nice to me, and they will stop obliterating our Conservative ideals and casting our ideas and policy proposals as racist, extremist, anti-women, anachronistic, and quit calling us “deniers” and fascist!

Liberals, socialists, and even Marxists are “progressive.” “Inclusive.” Those good people stand for “social justice,” “economic justice,” environmental justice,” and all manner of “justice.” Also the “human rights.” And they’re for “women’s equality” and an end to that rampant “systemic racism” that courses through your veins and the country you created. And by golly, they’re “for the environment,” the li’l angels.

And it’s all a load of crap.

I wrote yesterday that you should act to shut down or “cancel” those businesses or organizations that have expressed — and very obviously expressed — their desire to shut you down and cancel you by, for example, calling you a white supremacist, a racist, or a “denier,” etc., and/or by literally expressing their open desire for a Marxist America and Canada led by those idiots enamored by Black Lives Matter extremists and radicals; and/or by insultingly shoving that all right in your face even when you expected nothing more than sports or entertainment. They have no regard for the consequences of their militant and insulting actions because there have been none. This has to stop. The consequences should be their cancelation. It’s a sort of ex post facto cancellation.

The new Conservative leader must take that same tactic to the activist “news” media which is working against them. Accept no more bull from them, at all, ever. Exactly the contrary: if they try to shut you down, you have to shut them down times ten. Be as prepared for questions as Kayleigh McEnany. Manage them. Handle them. Cancel them. Take no guff. Ever. Do it, and do it now, or you will be canceled by them, and you will lose it all, for yourself and for the rest of us.

Previous article
They want to cancel you. Cancel them first.
Next article
Good News: Soccer fans boo players for kneeling during national anthem.