CNN and others purposely misrepresenting what Romney said. The perfidy of the media is amazing.

[Author’s note: cross-posted from the U.S.-centric BoldColors.net. I wrote this for BoldColors.net, but I’ve watched CBC’s smug “reporting” on this as well. It left me laughing, as the smirking, dismissive anchor practically laughed her way through it as if it (the “secret video”) once again, self-evidently, depicted Mitt Romney and Republicans (i.e., ironically half of Americans  —  but that irony flew over CBC’s heads) as total dopes and gaffe-prone losers. Whatever I might say about the American media, the mainstream Canadian liberal media is worse. And that’s saying a lot.]

CNN, in its mendacious teaser at its awful web site, selectively navigates through the “secret video” from a fundraiser in May, and conjures-up these choice words to attract attention: 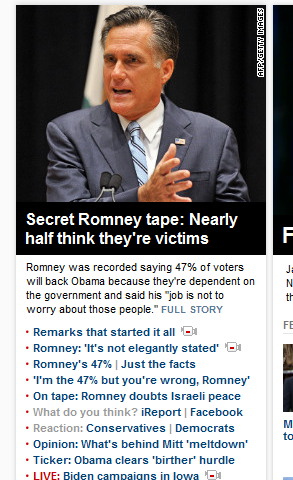 government and said his “job is not to worry about those people.””

The implication CNN is trying to make, to people whom they obviously think of as complete idiots, is that Mitt Romney has been caught tacitly admitting that he doesn’t care about 47% of the American people.

No wonder CNN and so much of the liberal media is failing.

Clearly what he was saying (and he’s totally right on about this), is that his efforts as a candidate (his “job”) are wasted in trying to woo those 47% of voters who simply cannot be wooed by someone like him, who is running for President and earnestly trying to help the 47% and all Americans, by breaking the growing cycle of dependence on government which is enslaving Americans. It’s that growing dependency which is actually harming those people and holding back all Americans (including that 47%), and America as a whole.

Meanwhile, a lying, conniving, truly divisive candidate, Barack Obama, keeps wooing that 47%, whom he obviously sees as useless idiots (or as the communist Vladimir Lenin called them, “useful idiots”), by promising them “free” goodies and entitlements galore, all to be paid for by raising taxes not on them (they don’t pay any!), but on other people: the “millionaires and billionaires.”

It’s the ugliest class warfare and outright lie I’ve heard from an American president and candidate, in my lifetime.

Some people, who don’t pay income taxes anyway, would be hard-pressed to not vote for Obama, if Obama’s willing to take money away from what he has repeatedly castigated as evil “rich” people, who pay taxes, and give it to people who don’t pay taxes. Many among them wouldn’t vote against that, sadly. So why waste valuable time and resources, as a candidate, trying to woo them away from that?

That’s what he was saying. You know that. And CNN knows it too.

Now I think Ronald Reagan actually might have tried, by speaking in bold colors and explaining these things to people in such a compelling way that they’d actually win their vote, but that was another candidate at another time. Mitt Romney is making a perfectly credible campaign calculation in not “worrying about” trying to woo many of those now reliably government-dependent voters to his side, rather than just concentrating on the middle of the pack who aren’t yet taken in by the specious, left-wing rhetoric. Particularly when, as never before, the liberal media is, without even the pretense of objectivity anymore, biased and working hard against him (as we’ve seen here), and campaigning for their man, Barack Obama.

But just look at that CNN.com teaser at right, which is where I saw this nonsense. It’s replete with anti-Romney BS. That’s bad enough. But when a news organization which holds itself out to be a purveyor of truth purposely misstates facts and misrepresent the truth, it actually rises to the level of perfidy, I think.

By the way, did you see the Tweet sent out by that CNN “reporter” Peter Hamby last week?

In case the Twitter link above doesn’t show up, it reads:

The link is to a Barack Obama’s campaign web site where you’re invited to donate to his campaign to help crush Republicans.

P.S. The Wall Street Journal has an excellent article regarding the numbers behind the “47%” :
The Data Behind Romney’s 47% Comments

Also see the transcript of Rush Limbaugh’s segment on this from this morning. (It’s what I said., only he has a few more people following him than I do.)