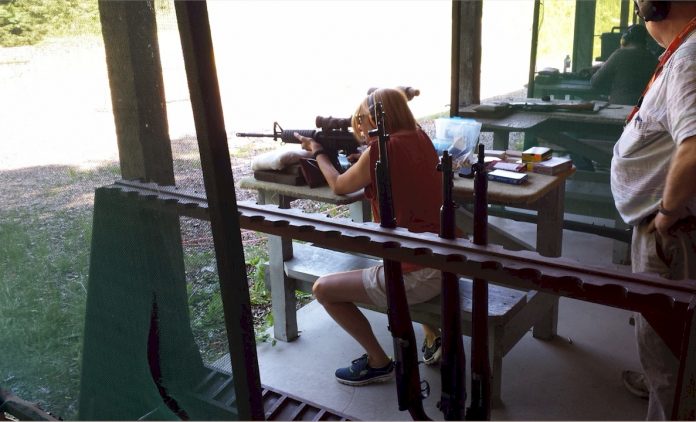 After a great morning at the shooting range, me, my wife (shown above shooting an AR-15 style rifle), and our ex-military and now lawyer friend were on our way home and naturally, as always, the subject of the left’s obsession with gun control came up. They want to take our guns away, but we’re not criminals, we don’t kill people, not even accidentally, because we’re good, innocent citizens who have followed all the rules and will likely continue to. We never think of ourselves as victims but we would be excused for feeling a little persecuted — and persecuted just to allow some self-anointed elitists who think they know better than us tell us how to live and what to do and what we need or don’t need, and score political points and gain power over us, and control us.

The “conversation” (lefties love that word) that leftists make around the gun issue is built almost entirely on lies and on our ride home we all had experiences that proved the point. Emotions, virtue-signaling, ignorance, fear, politics and power. A total scam. And we’re all as a society being duped into playing along.

The left’s arguments are not informed arguments, and much of the time they betray that they don’t even understand the basics of the issue: what the laws surrounding gun use are, or what is required of us good, innocent people to get a gun in the first place, nor what the mandatory safety courses involve, nor the stringent requirements that must be followed by gun owners, nor even the basics of how guns work.

A great case in point is what an “assault rifle” is and isn’t. That is a good one because it demonstrates the point very well: they are utterly clueless about the wildly or maybe even most popular rifle, called an AR-15, thinking that “AR” stands for “Assault Rifle” — which me and my friends used to laugh about because you know, they’re so dumb. It seems to us that if you demand an “assault weapons” ban, you ought to at least know what the heck an assault weapon is. And what an AR-15 is and isn’t. That way, you wouldn’t be banning what is arguably North America’s most popular gun type, and you wouldn’t risk being called a total idiot.

But we don’t laugh about their dumbassery anymore, because their arguments, “their truth,” no matter how ignorant, deceitful or deceptive, is now being used to craft actual laws. Powerful laws based on complete fallacies; misunderstandings, lack of knowledge, ignorance, arrogance, even lies. As I’ve said about other subjects, there is no “your truth” and “my truth,” there is only the truth. And they aren’t speaking the truth.

Or worse, they actually know the truth, which we suspect is the case in many instances, and they just flat out lie to your face. Some of this stuff is well-known or easily Googleable, and yet people who should have expertise on this are blatantly saying blatantly untrue things. So you tell me what they’re doing.

I said about guns that the left’s arguments are simply not informed arguments, but other times, they just don’t care what the facts are. The parallel between the gun “conversation” and other big issues is no accident. It’s purposeful. It’s a style. A method. It’s formulaic.

That style of argument is being made by leftists on the climate file, where “science” and facts and the moral high ground has all been ditched by leftists in favor of total nonsense, fear-mongering, faulty data often misrepresented on purpose; and even more so, a total, absolutely immoral, hypocrisy by the alarmists who get driven around in an SUV or flown around the globe on jets, while shaming us lowlifes for driving our kids to soccer practice, using a plastic shopping bag or straw, or mowing our lawn.

The recent plastics ban fetish follows the same formula. Science and vast experience has shown that plastic bags, straws, and other single-use plastics, properly handled as they are in first world nations, are vastly more environmentally friendly than the alternatives (read a recent article on the Trudeau Liberals’ ridiculous plastic ban here). They don’t care.

Abortion? Same method. Science is out the window with these people, since they know full well what we’re dealing with is a real, live, innocent human being in the womb. A boy, or a girl (and no, nothing else). They try to fake us out by calling the human life, the baby, “a clump of tissue” or “a clump of cells;” and referring to the procedure, the killing of the child, the crushing of the skull and the dead baby being sucked out of the womb and thrown into the trash, as “reproductive choice.” Or “women’s healthcare.” They refuse to acknowledge the life of the baby or its value. Bugs and birds and fish they care about protecting. Babies? Not so much. The hypocrisy is astounding.

They refuse to allow others to think differently than they do. You like guns? You’re a redneck racist deplorable ass and you are the cause of mass shootings and random killings of people who may or may not be women in particular. Being a skeptic or unbeliever — or realist — regarding what they originally dubbed “man-made global warming” means you’re a “denier.” As a government they deny funding for summer employment programs unless employers succumb to their thought control, and sign an agreement to embrace abortion. Public depictions or descriptions of the abortion process are forbidden because they know just how fraught they are — how convincing the facts — the science. They hate ultrasounds because they literally, scientifically, show the beating heart and an actual, identifiable baby to the mother and father. It’s all getting Orwellian.

These conversations are increasingly total garbage conversations. It’s like arguing with a brick — if bricks could lie to your face and be hypocritical.

So, yeah, on the way back from the crowded gun range, we saw how the gun control conversation that takes place in this country and elsewhere is a lot like other conversations with liberals and leftists these days — they’re based not on science or evidence, as they would have us believe (so even that’s a lie), but instead they’re formulaic: they’re based on emotion, fear, power-seeking, elitism, lies, ignorance, hypocrisy, virtue-signaling, and well, total bull. Just like my shooting skills, I’m right on target on that one.

Previous articleTrudeau’s looming “plastics ban” is (another) total crock, and here’s a video
Next articleSpeaking of total tools…