On the state-run media, the liberals’ CBC, the state’s self-esteemed parliamentary reporter Julie Van Dusen was seconded to get some comments from the Honorable Minister of Public Safety, Stockwell Day.

She failed.  He was clearly rushing to a meeting when ambushed by the ever so self-important reporter from the network that mercifully hardly anyone watches.  (Apparently there are important things to do when you’re in a government actually working to try to do something positive, and this comes as something as a surprise to the veteran state-employed reporter Julie Van Dusen.  In fact she thinks it’s “terrible”, I think.)

But they showed it anyway.  Why would they do that? 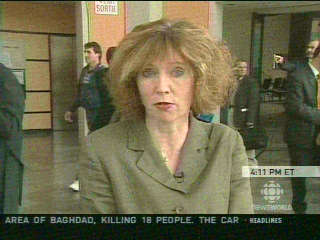 It was an excercise in watching the typically Canadian liberal media and certainly CBC-style passive-aggressively sarcastic, irreverent, dismissive and condescending attitude from the state’s reporter toward the Honourable Minister.

Here’s what I watched and heard:

The Honourable Mr. Day – Sorry I’m late for a meeting in my office … I’ll [inaudible] later.

As the rushing Honourable Minister is now clearly way out of earshot, but the camera is following him now 50 yards away and the microphone is still on (so it’s done tendentiously—purely for the purpose of playing to the TV audience, driving that agenda, and making her churlish point …):

State-run media employee Julie Van Dusen – So what about that agreement? What should, um, what would one expect to see in it?  Will there actually be a paper?  Regarding those prisoners?  …

And what do you know, he didn’t cancel his meeting to talk to Julie Van Dusen, so what a lout, eh?  But at least they got to show their video clip of Julie Van Dusen not getting a comment from the Honourable Minister.

And at least she wasn’t wearing a baseball cap backwards and chomping on a hunk of chewing gum.  She truly is the media’s elite.