This afternoon on the CBC Newsworld (channel 390 on my dial, with other CBC channels taking many of the rest of them), the so-called “news” anchor Sarika Sehgal (think of a George Stroumboulopoulos but of an alternate gender choice) interviewed perpetually state-employed CBC show host and leftist agitator Avi Lewis.

For reference, Avi Lewis is the son of the

This is what happens when you elect “progressives” like liberals and you’ve got to be kidding party politicians, who collectively create and support a state-run media, which seems to have as its raison d’être the driving of an increasingly left-wing agenda; and who then provide themselves with the authority to appoint themselves and their like-mindeds to run it, and to work for it in every capacity—- people who then dutifully appoint other like-minded “progressives”, and so on, and so on… 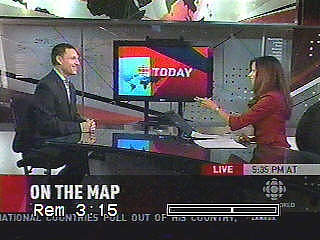 It seems son of Stephen Lewis has yet another new politics show on the state-run media, the others having failed, I guess.  The CBC never gives up (except when Canadian troops are defending our way of life—then they demand we cut and run at the earliest possible convenience).  Thus, the CBC now has yet another outlet in addition to their hideous show “The Hour” starring the aforementioned leftist George Stroumboulopoulos, and all their other shows not the least of which are their “news” show like the one I’m currently talking about, to tell Canadians how to think—which coming from them is: manifestly far-left, and rabidly anti-American, and anti-conservative, and hopefully anti-Christian, it seems to me and other intelligent people.  At our expense as taxpayers.

As we heard today on the “news”, Avi Lewis apparently has former U.N. Ambassador John Bolton on as a guest as his first hit piece informative show, and Avi apparently believes it his patriotic or at least CBC duty to dissect and mock the rather brilliant John Bolton, great American, in a manner which stinks of Bolton: a man and his country which we all hate, duh.

Liberals always speak as though everyone in the room agrees with them.

Here’s a bit of the informational conversation between Avi Lewis and Sarika Sehgal, right in the middle of the “news” show called “CBC News: Today with Sarika Sehgal”.  This is , in effect, “news”, according to the state-run CBC.

Sarika Sehgal: What was it like to talk to him or try and interview this guy?

Avi Lewis: Well trying to get Bolton to stop talking is the challenge…

Avi Lewis: …he’s like a spin machine with titanium cladding —you just can’t—so really I wasn’t going to get through to him?  But he’s got this amazing thing where he toes the administration line—did it at the United Nations, has been doing it for years—and at the same time is exceptionally honest in a moment, like he was just there [the sound bite clip] saying ‘I actually don’t care, if this locks in a sectarian bloodbath in Iraq’ …

Sarika Sehgal: But that’s not the truth is it?!  I mean ya gotta wonder what his spin is, what he’s trying to say…

Avi Lewis: You know well I used to, um, on Counterspin back in the day when I was hosting that debate show he was a regular guest and he was absolutely consistent—whatever is in the United States strategic interest that’s what we should do—damn the consequences, damn the casualties, that’s the only thing that matters, and you know, it’s no surprise that the Bush Administration put him in such a high profile place [smirking].

Sarika Sehgal: Is it hard to keep yourself censored—is that hard to do on this kind of show? [laughing]

Avi Lewis: Happily the show’s concept is that I’m relatively uncensored so apart from language I’m allowed to [hahaha] indulge.

He’s then asked what he hopes to accomplish with this show, and he answers, missing the irony, that he hopes to bring some “journalistic rigour” to television, and to be a show which “brings facts to bear on the arguments”.  Apparently he’s never watched Fox News Channel and only watches CBC.  And didn’t hear himself talking just now.  And apparently they both forgot that they just played a short sound bite and offered exactly no “facts to bear” and no “journalistic rigour”, because….

Sarika Sehgal: Yeah it won’t be in a sound bite kind of way—it’ll be more of an analysis….

Avi Lewis: Yeah that stuff is really easy and it gets really tired—just watch American TV.

Switching to Fox News Channel now.  A fella can only take so much dumbification.