It’s another “balanced”, “fair”, “objective”, “news-based”, and strictly “informational” report from the CBC, in which they absolutely refuse to take sides, in order to be effective and intellectually honest journalists on behalf of all Canadian taxpayers, who fund their work with their tax dollars.  They’re very good at this, and by way of example, they don’t even take Canada’s side, as I do, in the war on terror (as they carefully call it “the so-called war on terror” and calling Islamofascist terrorists and jihadists who kill our countrymen and soldiers “militants” —no different than we are, for example), or on anything else Canada is involved in —of course unless it’s gay marriage or the “man-made global warming” or Barack Obama, for example.

So as Alaska Governor Sarah Palin is stepping down on Sunday, the state-owned taxpayer-funded and anti-conservative CBC decided that today it has to do another one of their fantastic informational exposés about Sarah Palin on their news channel, to inform Canadians. 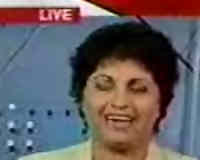 Apparently that would explain all the hideous laugh-out-(very)-loud guffaws and faux objections (“oh yer naughty!!!!”) from the anchor as the hate-filled (and well-known to be) anti-Palin guest Shannyn Moore roundly mocked Palin for being an “Evangelical” and a “conservative” and who might well start a new cooking show about “cooking game meat” (…as the CBC news anchor Meharchand laughs like a hyena).

Imagine a well-known conservative spokesman mocking a Muslim for being Muslim, on the CBC;  or mocking someone for being a typical dumb-ass liberal who wants to cook organic vegetables.  (I’ll pause now for your robust laughter……  OK I’ll pause a little longer…… no no please stop now).

Shannyn Moore runs a blog which is entirely based on rabidly, hysterically, and obsessively bashing Sarah Palin and really anything remotely conservative.  The CBC not telling us that is abject misinformation.

And she writes for the CBC’s favorite news site (besides the extreme left hate site the Daily Kos and Media Matters), the far-left Huffington Post.  Good choice for fair, balanced analytical observation of Sarah Palin, CBC.  Way to not take sides.  Vote liberal.

Fully aware of what the answer would be because, clearly to me, this Sarah Palin hit piece was set up before the interview started, the CBC’s Meharchand puff-balled this leading question in order to enable them to both craft another cheap shot at Sarah Palin, but also at one of their other nemeses, Fox News Channel, while they were at it (as if Fox News is the unbalanced one —this is a case of the pot calling the snow black):

CBC anchor Suhana Meharchand:  “Where do you think she could pop up if it’s not on the book tour, the speaking engagement tour, you know… and we know I mean politicians can make tens of thousands of dollars fer one speech, maybe that’s what the big attraction is

as well and uh ya know ya can’t blame someone for wannin’ to put food on the table fer their family, but where do ya think, where else could she pop up?  Could it be a television show, could it be you know she was a beauty queen once, [then adding dismissively] maybe she’ll be in magazines, I dunno.

Anti-Palin guest analyst Shannyn Moore:  …Wool it’s really hard to speculate she left us sort of in a constitutional crisis here in Alaska [huh?] … I do know that Rupert Murdock’s yacht is outside of Juneau right now [Meharchand breaks into hysterical laughter] and his plane is reportedly on the ground there so who knows maybe she’ll be popping up with a Fox News show!  I mean just there the possibilities are endless, maybe a cooking show of game meat I mean there is so many possibilities.

CBC anchor Suhana Meharchand:  [Laughing] Shannyn Moore you are bad!!!  I wanna thank fer takin’ the time to talk to us today.  Have a great day!!!!

Why didn’t the CBC get a Palin supporter instead, to comment and “analyze”, instead of a person well-known in advance to be an vitriolic, outspoken Sarah Palin hater (and Huffington Post contributor)?  Or (God forbid!) both angles?

Because that would be fair to Sarah Palin.  And properly informing Canadians, rather than misinforming them.  And they’re against that.

And because once again, the blithely arrogant CBC anchors and news editors don’t care one whit what you think about them being a blatantly biased, unbalanced, un-objective, far-left-wing news channel, specializing in being rabidly anti-conservative and unfairly bashing the crap out of anyone conservative or Christian.  They think it’s funny.

The smarmy Meharchand loaded her guest up with prime Palin-getting questions through the interview, rather than seeking any sort of “truth” or “information”.  It was purely an exercise in mocking Palin.

Introduced as a writer for the Huffington Post without even labeling the Huffington Post as the far-left anti-conservative propaganda machine that it is, and without telling us that Moore practically makes a living bashing Sarah Palin, and holding this out to be an objective analysis about Sarah Palin leaving office, on a state-owned, taxpayer-funded news channel, CBC anchor Suhana Meharchand engaged in a load of journalistic BS again today, as if it’s her personal left-wing advocacy video blog paid for by all taxpayers, and, like all liberals and liberal-leftists always do, as if everybody in the nation agrees with her.

State-owned or state-run media should be banned in this country, and that notion enshrined in the constitution.