Home Canada CBC: Equal Time for Mocking Liberals? No No, I Wasn’t Being Satrical.

Yesterday, as I mentioned on Twitter, the state-owned, taxpayer-funded CBC tweeted out a snark-filled biased political cartoon. Because Canada needs a state-sponsored snarky cartoon drawer. And a political one at that. Because there aren’t any in the private sector. Nope.

The #RobFord crack scandal explained as a graphic novel in the players' own words: http://t.co/Rs3vJVIcGl pic.twitter.com/GGjoqt16Nq

Yeah let’s get that through our heads: the state-owned news media  —  in Canada  —  draws-up a snarky, biased, political cartoon, not unlike what they might do in socialist banana republics like, say, Venezuela, on their state media. And like at other state-owned media, the idea at the systemically left-wing, state-owned CBC, is to mock political opponents. To bring ’em down. And to prop-up their own: socialists, liberals, progressives generally.

It’s how they sustain themselves, and they’re all about being “sustainable” as you know only too well. They’re socialism-reliant, so they hate conservatives.

My reply was too tame:

So they slammed Rob Ford with a snark-filled cartoon. But they weren’t done. 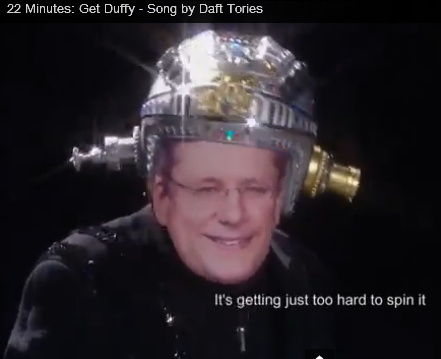 I’ve tweeted and posted about Rob Ford, I’m no fan of his now. And Mike Duffy too. Never was a fan.

But I’ve been following how the media’s mindset is clearly to pile on, and just either “get Harper,” or “get Duffy.” Either way, they’re both supposed “Conservatives,” so they don’t care who wins or loses  —  in fact they hope they both lose.

I tweeted some time ago:

Well yesterday the CBC, in their continuing effort to slam conservatives but not leftists, also tweeted about Duffy. It was to promote an upcoming segment on their un-funny show “22 Minutes,” which mocks Mike Duffy and Conservatives generally. Which we paid for. A supposedly funny song called “Get Duffy” by the fake band the “Daft Tories” is what’s that one is about. It includes lines like “You gotta fight to ‘get Duffy'” and “Everybody gotta fight to ‘get Duffy’.”

I can say that. State-owned news should not.

#CBC's @22_Minutes parodies Daft Punk's 'Get Lucky' with 'Get Duffy' http://t.co/Thp9BWduU6 via @thecanadacom

Again my way too tepid reply:

State-owned CBC snark-fest in high gear, what with all these "conservatives" to mock. So glad I pay taxes. https://t.co/SBprWA26Qi

As long as the state-owned, taxpayer-funded news media exists  —  and it’s waaaayy past its best-before date  —  and it is going to wade into the forum of ideas and specifically politics, and therefore manipulating how Canadians think about particular politicians and particular parties, then they should be forced by Canadians do it evenly. Why let them get away with mocking conservatives, and promoting socialists and liberals or any other progressives? Are we stupid? They are the enemy.

The state-owned news media should really question their Liberal Party leader Justin Trudeau’s sexism and extend the “conversation” (they usually just love that left-wing buzzword) to question his vacuousness over the sexist, idiotic poster put out yesterday by him, advertising a ladies night of cocktails with the self-esteemed one  —  at $250 a pop. I posted about that earlier today.

Will they mock Trudeau for his “ladies night” idiocy with films and cartoons and spend tons of taxpayer cash making an idiot of of him on their TV and radio and internet programming, as they did Ford and Duffy and countless others?

My guess is no, they will not.