Yeah…. I’m not so sure Trudeau is your man to “chip away at state control.” Especially as reported by the state-owned, and Trudeau backed, CBC. In fact I’m sure of it. And if I’m 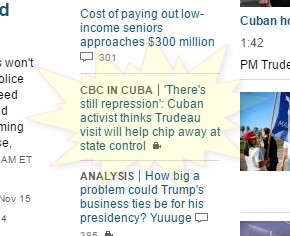 honest, while I’m sure the Cubans desire it (Cuban exiles all voted for Trump), I’m not at all sure the CBC or Trudeau desires any such “chipping away at state control.”

And then I wake up, and realize that of course they’re not embarrassed and of course they don’t cringe. It’s exactly what they want.

When Justin Trudeau comes home, assuming he will come back from his grand outreach to the communists, he will carry on chipping away at our personal responsibility, individual control, private enterprise — and building-up state control. The CBC will flourish.

Previous articleGov gets in way of gov, which gets in the way of people, progress, and sanity
Next articleGlobe & Mail’s liberal smugfest for Monday Nov 21 2016