BRILLIANT take-down of CNN, a CNN reporter, a CNN anchor, and its hideously biased agenda-driven editing 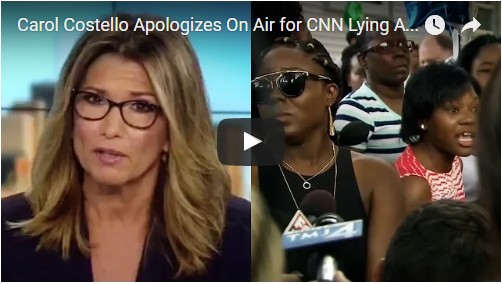 I’ll get to the point in a second. But first (and I promise this is related), I read my usual National Review articles this morning and copied this nugget:

Conservatism must be about explaining to non-conservatives why they should be conservative not why they can’t be. This is politics 101 going back to Aristotle: Persuasion.

I’ll take that as good advice from someone (Goldberg, I mean, but yeah also Aristotle, whoever he is) who definitely practices what he preaches; and as a reminder that I should do more of it here. [PAID LINK — As an Amazon Associate I earn from qualifying purchases.]

If you read that NP article and the others I read over the past couple of days (see short list below), you’ll see they’re all related, and they all lend themselves to the video that I’m on about here (which is actually unrelated to the articles). See how I tied that all together? Well I think it’s a good package.

So if I’m doing my homework correctly, I’m at least persuading non-conservatives to see that (1) we’re a diverse group of actual thinking people, often self-critical among other things, and (2) what we’re up against is huge and it isn’t actually made up or delusional. I’m trying to engage some of Aristotle’s (whoever he is) logos, pathos, and ethos (look it up like I did).

The video is done-up by Anthony Brian Logan. He describes his YouTube channel as  “Current events from the perspective of a young black male conservative and news/political junkie.” I like his perspective. It’s truth.

This CNN anchor, above even their others, should be one of the most prolific apologizers on air today, but 99.9% of the time she fails to apologize for anything. I suppose she thinks she’s simply “sticking to her guns” — well OK actually that brings up a great point (thanks, me): she’s plainly, rabidly anti-gun, so she’s literally “sticking to her anti-gun rhetoric,” or something  –which she seems to find to be a good quality in a supposedly unbiased journalist. (Sidebar: See an interesting article here about how one news station legitimately stuck to their guns.)

I’ve written her up in my own effort at exposing her bias, but I’m pretty sure someone could make a go of a website devoted just to daily examples. Her anchoring is replete with self-satisfied, anti-conservative bias both in undertone, and hell, sometimes right-in-your-face conservative mockery (for which she never apologizes, even in the face of a Twitter onslaught). But quite apart from her anchoring, as I recall them, her all-too-few trite apologizes are smug, insincere, and serve only to increase the aggravation level generated in me by the bad reporting for which she is supposedly apologizing. Nothing in her “apologetic” delivery speaks to her sincerity, and in fact quite the opposite. Every apology comes off as forced, delivered extremely begrudgingly, and quickly read off a teleprompter as written by some poor CNN schlub who was forced to write it equally as begrudgingly. Gosh it’s shocking that CNN ratings are still faltering.

I’m just glad Costello is white, since it shields me from being called a racist. Oh who am I kidding. I’ll be called one anyway.

Previous articleLiberals now desire a spread of China’s people to Canada’s small towns; don’t need them in big cities any more
Next article“Lexus Liberals” – a funny by Conservatives… and then even funnier: the state-owned CBC comes to the Liberals’ rescue.