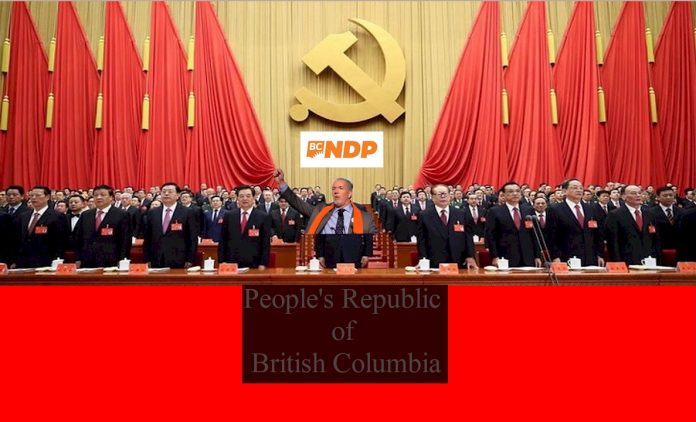 Big government control over everything. Because the people need to be controlled by the betters in big government. Control. Power. Over the people. Fear the government. Not the other way around, nope. This is NDP theology. Control the stupid, stupid people with big government rules, regulations, taxation, require them to report to government on demand, secretly surveil them, and control, control, control. That is the point. Therefore two items popped up today. Just today alone.

ONE: The far-left BC NDP government today announced that it intends to pass a law that requires gasoline retailers to provide their private pricing information — details on how it is they come up with their price — on a regular or semi-regular, or maybe just on an ad hoc basis to the government, but basically whenever the government demands it of those private businesses, and they’ll decide on the stupid details later, you idiots. Because they are the government. And they control everything. Business, the economy, your health, gas prices, whiskey, bingo, pot availability, lotteries, car insurance, ferry rides, education — your very life. Everything. You, manifestly.

VICTORIA — Oil and gas companies will be forced to hand over sensitive data on fuel imports, supply and gasoline pricing, under proposed legislation introduced at the B.C. legislature Monday. …

…“This legislation brings us greater transparency at the gas pumps and sends a message to the oil and gas companies that the days of setting your gas prices in secrecy are coming to an end,” he said. …

… Ralston’s new legislation would require oil and gas companies to regularly hand over their data to the independent B.C. Utilities Commission. The schedule would be decided later by cabinet. …

… The proposed legislation, if passed, would also allow for inspections, document seizures and penalties of up to $1 million for companies and officials who fail to comply with providing documents.

Sounds like a free, democratic  country, if by what you mean by free and democratic is China, or North Korea. When the government starts to literally control private business or what remains of it after having already taken control over vast swaths of what should have remained strictly private business and the free and open marketplace, it’s well past time to act. Because unless you’re a useful idiot, you have to know that what remains of your freedom is in doubt. Some people are fine with that. Chinese communists, for example. BC NDP supporters, perhaps.

TWO: The far-left BC NDP government wants to start using satellite surveillance to spy on farmers. As you may know, farmers are worse than the drug gangs, which have been allowed to grow exponentially, with killings and drug deaths and general mayhem growing in BC. Worse than illegal aliens literally strolling across the border, another growing problem with huge criminal consequences. Worse than the money launderers, which has wreaked havoc. Farmers: the worst people ever. Time to deploy military tactics. So, to make sure farmers aren’t breaking any of the myriad laws they are required to abide by, and that they were doing their farming stuff right, the BC NDP government wants to deploy secret surveillance on them using military-style satellites. (Can I call them “assault” satellites at this point?)

Because big government knows its farming. Just ask the communist leaders of the old Soviet Union! And moreover, they do this because people, especially farmers, are bad, and compared to the government bureaucrats, rather stupid; and the big government, knowing everything better — being better people —  must control these bad, stupid, common people.

B.C. puts satellite surveillance of farms
on hold after outcry

The Ministry of Agriculture has withdrawn, at least temporarily, a plan to use satellites to detect violations of regulations governing the Agricultural Land Reserve.

MDA Systems was to provide radar satellite surveillance over parts of the ALR to detect road-building, commercial vehicle storage and non-compliant buildings on farms, according to a government notice.

But the $70,000 contract was abruptly withdrawn Monday after farmers complained the government was “effectively spying on both citizens and private land on a daily basis,” in a formal objection to the Agricultural Land Commission.

… The targets of surveillance must be kept secret and farmers unaware for the project to provide valid data, according to the notice of intent. “Due to the limited nature of the area being imaged, it is possible that the landowners may behave differently if they are aware they are being monitored,” it reads.

B.C. farmers on a 3,200-member Facebook group were outraged by the surveillance plan and bombarded the provincial government and the commission with letters.

“We were assured at engagement sessions with the ministry and the ALC that enforcement was complaint-driven and that no one was using surveillance, then we find out about this surveillance contract,” she said. “It’s quite frightening and there is no indication that safeguards were in place to protect people’s privacy.” …

Again, it all sounds very much like communist China to me, inasmuch as it is absolutely identical to what they do in communist China. There are daily horror stories about China doing exactly this sort of thing to their citizens. To control them. Using the power of the big central government to force the citizens to act a certain way. To control the citizens. Most people read these stories and are aghast. Does the BC NDP government condone it? Serious question.

Previous articleLike “chickadees sneering at an eagle” — our self-esteemed, preening betters, who discard gems like Don Cherry
Next articleLeft-wing-governed Vancouver to see 9% rise in city taxes. Councillor: it’s only “reasonable.”