The Vancouver Sun story included this line, as declared by the union boss:

I just thought that was laugh-out-loud funny.

Well maybe just this one extra thing  —  oh my gosh.

Well OK that, and this BC government election contribution chart — which seems to indicate that the BC Nurses Union has a long history of donating union membership dues to the NDP  —  a party which is “all-in” insofar as their chosen base of support. For the rest of us, “duh” would probably suffice. 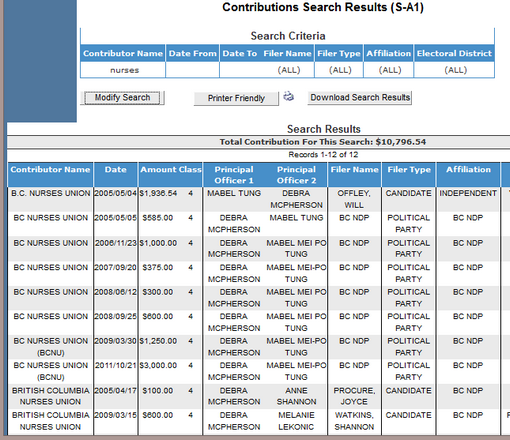 As the data indicates, the BC Nurses Union is only nonpartisan inasmuch as it is an NDP partisan, and a nonpartisan of any other party. The union may not openly declare their partisanship, or they may even try to hide it  —  as laughably seems to be the case here with the boss’s “Nurses are non-partisan” hilarity. But as the owners of the massive labor union industrial complex know, declarations help, but big union money  —  not just declarations of partisanship  —  talks. Talks, that is, to the NDP.

Also, I think it might be worth asking why the reporter doesn’t bite their ever so nonpartisan lip and ask the labor union boss for clarification with regard to what could very credibly be called a really outlandish, if not funny remark.  Particularly in light of the facts, and in light of the upcoming provincial election in BC, and in light of the fact that it is exactly that  —  political party support  —  to which the union boss was referring when she said “Nurses are non-partisan”. I would have asked that.

Or, say, ask the question to do the job journalists and the journals they write for have taken on as their duty, and help ensure the public understands the actual truth, instead of just feeding them or allowing them to be fed more total BS as told by the likes of public-sector labor unions, and the political party they own  —  a party which appear set to assume government power in May.

Maybe the newspaper has become a funny-paper, sees the irony in the union boss’s remark  —  as left unmarked upon and unquestioned  —  and is just trying to accommodate our collective funny bone with some sort of quiet sophistication. That could be it. What would actually be funny is to do as I would have done, and have the union boss fumble through an answer to the questions about that remark.  That’d be some good reading.

I remain skeptical about the motives of the left-wing labor union bosses, their party, and their brethren in the media division, and their partisanship.  Believe it or not, they’re not trying to be funny.