BC Budget Grows Government. Which Seems To Be The Point. 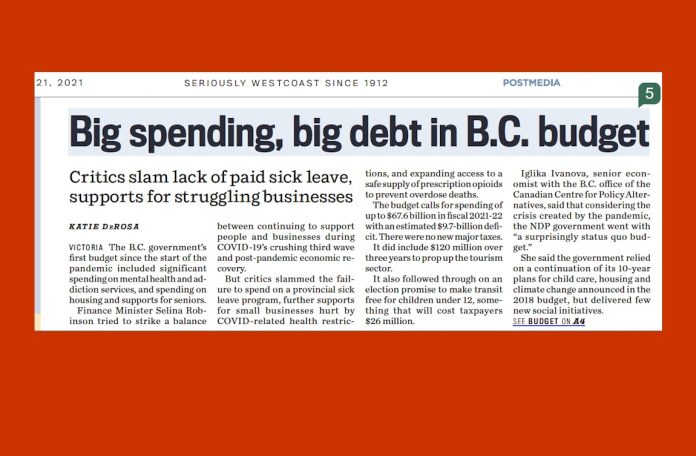 I already splotched yesterday on the deeply red federal budget (red in every sense including Liberal red, and red politics), and just as another example, and since it’s in the news (in the news in BC only, because Canada is a “nation” or “family” in name only and has massive issues), BC’s budget was released yesterday. Unless you live in BC, you will have no idea, and probably don’t care. But it’s the politics I’m on about here, which you do care about.

I’ll spare you the details. Suffice it to say that because it’s a left-wing (NDP variety) government, the most important thing to them is growing government and its control over you (exactly like the other variety in Ottawa). Well that and spending more and more state money —as if it grows on trees, which if it did, they wouldn’t harvest its bounty of cash on account of global warming or “sustainability” (ugh) or some other left-wing blather, which is entirely contradictory logic, but you’re used to that by now from the left-wing woke set.

But as I said, it’s largely about growth of already huge government. I mean growth that they’re doing on purpose! Core government ministry staff levels (this is not nurses or healthcare workers dealing with the Wuhan Virus which they call “COVID-19” for some weird reason having to do with woke politics, but rather just government minions — bureaucrats of every description including “utterly useless”) have increased to 39,660 in the last full year, up 21% from the last year of the BC Liberals, which was itself a growth-in-government regime.

The Vancouver Sun whitewashes it as best they can (notwithstanding their more promising and enlightened headline as seen in my cover graphic, “Big Spending, Big Debt in BC Budget”), by appealing to experts at none other than the very left-wing Canadian Centre for Policy Alternatives (where the “Alternatives” they speak of is socialism, but nobody except me acknowledges that fact) for comment. And of course their economist Iglika Ivanova is dour about the lack of spending and lack of debt and lack of government growth and lack of adequate tho increased government control over our lives:

“Unfortunately, this budget misses the opportunity to become … the most significant budget of the generation, which I thought it would be,” Ivanova said. “Considering the significant, very deep, gender and racial inequalities that the pandemic spotlighted, I would have liked to see a lot more ongoing investments in speeding up some of those programs on affordable housing and child care, and on addressing their urgent climate emergency.”

The doubly extreme superlative “significant” + “very deep” racial and gender inequality issues, and the “urgent” + “emergency” climate thing both aside, here’s an “ongoing investment” + a “speeding up” that leaves a nasty stain (and a populace of serfs), even as judged by those who were miseducated in public schools about the role of government and its control of our lives:

According to my reading of the BC budget (pdf) (mercifully, it’s “only” 184 pages, not the even more epic Russian-novel-length 780 pages created by a staff of thousands working for the obviously way-too-yappy Chrystia Freeland and her secretariat who created her tome from Hell), there are nearly 490,000 people in British Columbia’s core public sector working in the core public service, at Crown corporations and agencies, in health and community social services, K-12 public education and post-secondary institutions. According to a BC stats document, 2,661,200 people were employed in BC last month. My math (self-taught, don’t worry) tells me that means nearly 18.5 percent of the BC people work directly for the government. And more besides, because that can’t possibly include employees — direct or indirect — reliant to some degree or entirely, on every other government offshoot (nobody could even estimate the real, full extent of government, nowadays). So likely at least one in five people now work for the government. BC also has nearly 7% unemployment. Lots on welfare too. That’s a lot of people — a huge percentage — now reliant to one extent or another — or entirely — on government.

I imagine they aim to increase those numbers.

But that’s what to expect from a government — one based on a left-wing and really, a totalitarian ideology — which literally thinks it runs all of life itself. The Vancouver Sun columnist Vaughn Palmer (no enemy of The State) wrote of the NDP leader today in light of the budget (headline: “B.C. debt soaring, ditto the size of the public service“):

Near the end of her news conference, [BC Finance Minister] Robinson was asked to account for the $3.3-million (30 per cent) increase in the budget for Premier John Horgan.

“We’re investing to make sure that he has access to British Columbians,” she claimed. “It’s really important that the premier hear from all regions of the province, that he’s able to engage with all stakeholders and that he talks to regular British Columbians.”

In fact, her budget documents show half the increase — $1.6 million — is for a planning and policy secretariat to provide “strategic advice to the premier and cabinet on the prioritization and sequencing of key initiatives of government.”

Most of the money for the secretariat goes to increased staffing. As if the premier’s already ample platoons of political advisers and strategists weren’t enough to keep him well stocked in plans and priorities.

Talk of a huge growth in an already outsized government, more government spending on all manner of social engineering, huge deficits and debt, blather about “issues around equity and inclusion” (in a budget document!) and a central “planning and policy secretariat” —sounds exactly like a story out of Soviet Russia to me.

Previous articleCanada is being walked blindly down the garden path
Next articleTrudeau: “There’s an awful lot of work to do.” In America. On “Systemic Racism.”