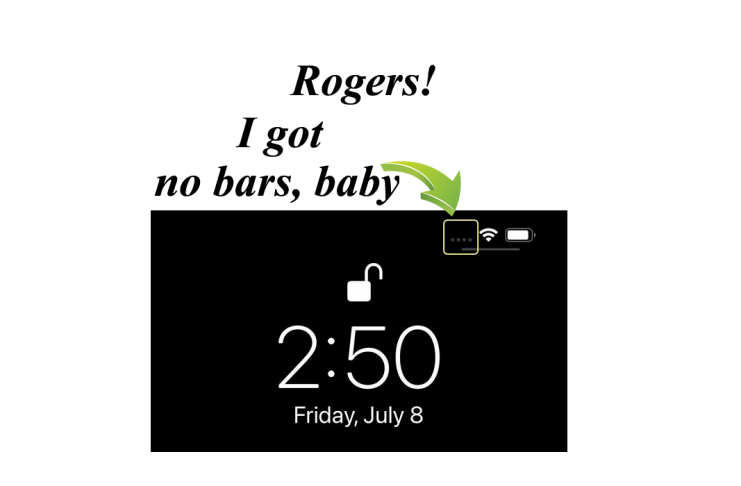 Whoo boy. There will be ramifications from this, no doubt. I just hope they’re the right ones.

Rogers — the cell phone carrier in this household (which relies to a very large degree on its service for our work, to say nothing of our health and safety) has been down all day. And it’s mid-afternoon here.

Let’s hope today is the day the Chinese Communist Party chose to hack our phones and steal our information! Suckers! We’re using parts and systems made in China! Just you try and hack us!

More seriously, let’s hope this outage isn’t in fact due to a foreign attack testing their abilities, or whatnot, to enhance their future global plans. It wouldn’t shock me terribly if it was. And if it was, this is an even more serious wake-up call.

It’s a little hard to fathom the way the technology leaders (and the ubiquitous overlords in Big Government who make out like they know everything waaay better than us and we should leave them in charge of literally every single thing in our lives) have allowed a breakdown of normal every day and, by now, essential technology to present a situation in which we cannot even call 911 if we have to, much less, you know, work, if our work requires phone service. But that does appear to be the case. 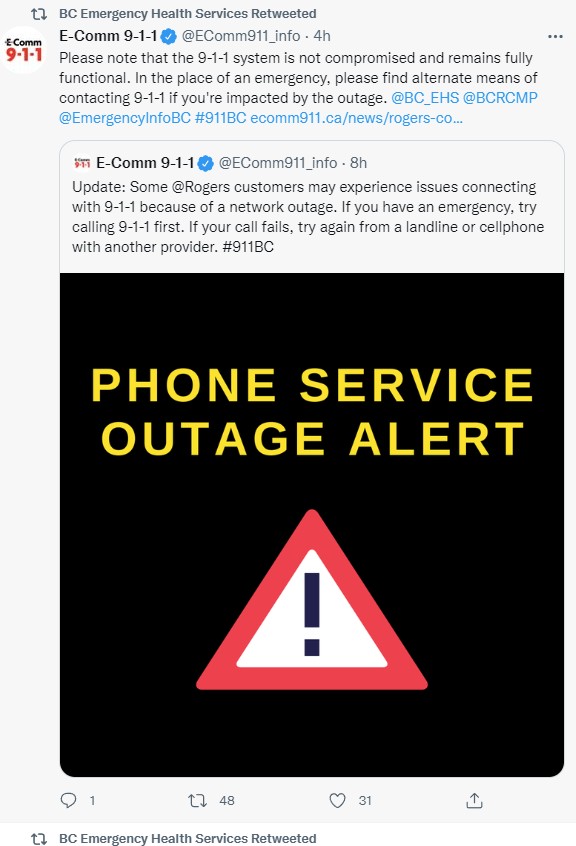 So, say I’m having a heart attack. Am I supposed to get just over it and damn well get up off the floor and wander over to my neighbors, and canvass them one by one as to their cell phone carrier and whether I might trouble them to call an ambulance? Or a hearse?

Apparently, yes, that is exactly the remedy offered here: 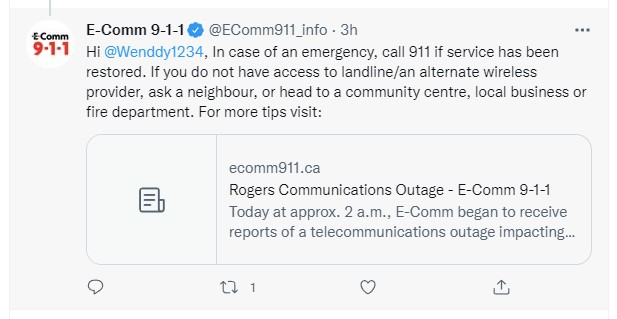 It’s not just me and my ever-so selfish healthcare needs. Schools, businesses, the already beleaguered transportation industry, and more, are all suffering and that suffering is bearing down on, what —millions by now? 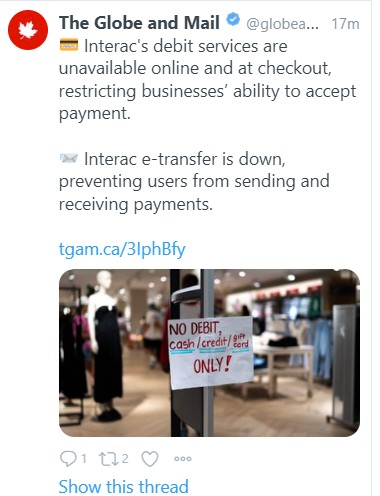 And you can trust the state-owned CBC to be the ones on be on top of the REALLY important ramifications: DEAR GOD! (Or Gaia, or whatever!) Paying our taxes to the yummy big government could be hampered in some way! That’s their prime concern, today, folks. As a taxpayer-reliant outfit, you can’t blame them for thinking that you dumb-dumbs paying your taxes is far more important than, you know, your wife’s stupid stroke, or your privileged personally and privately-owned house going up in flames. 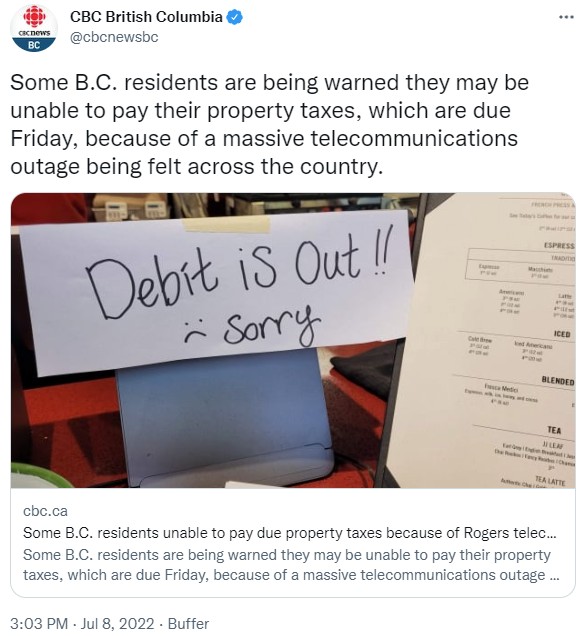 I’m not a telecom technician any more than Justin Trudeau is fit to be prime minister, but it seems to me, to be a modern country, or, you know, a sane one that thinks about personal and national security as “a thing”, we’ll need to have a look at how this all works and make it much better. Maybe the two firms that compete (haha) in this space could set up an automatic default backup switch to the other carrier if the first one drops out, or say, a default switch to Elon Musk’s new Starlink satellite system, or something.

Of course in other countries that aren’t stuck with a government-sanctioned mobile oligopoly like Canada is, and where they have lots of competition, it would be cheap enough to have three phones on hand with three different carriers — or more — for the price of one crap phone plan here. The latest news on that front is going backward and making it worse, as Rogers is about to buy Shaw with the blessing of the genius feds.

At the top, I said “There will be ramifications from this, no doubt. I just hope they’re the right ones.” What do you think most socialists in the NDP and not a few Liberals are thinking right now vis-a-vis more government control or even another state-owned service startup? They know better!