“Our” columnist Mike Adams—the professor I always wished I had while I was in college and university—is coming out with a new book on February 25, 2008.  It’s sure to be a real crowd-pleaser among liberals, feminists, communists, and all the “womyn” in Jack (“ass”) Layton’s you’ve got to be kidding party.

Be sure to buy it now in case all the lefties snap up the first print-run!

Hardcover: 224 pages.  Note to liberals:  Will burn easily!  Then use the coals to set your hair on fire!

Buy two:  one for the Canadian Human Rights Commission! 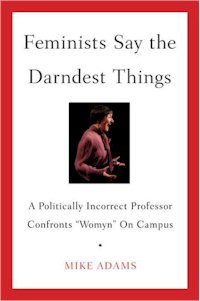 What happens when a conservative Christian white male professor – with a wicked sense of humor—stands up to his “feminazi” colleagues? The darndest things!

Professor Mike Adams at the University of North Carolina-Wilmington was an atheist and a Democrat when he entered academia over a decade ago. And as you can only imagine, he fit right in back then.

But ever since he saw the light, the full-time feminists on campus have had Professor Adams in their crosshairs. Their insults, taunts, foul language, intolerance, and public declarations about their sex lives have trailed him from the campus quad to the courtroom.

In this series of letters Professor Adams has written to his real-life colleagues, he exposes these real-life incidents to the general public with his trademark barbed wit. You will be praying for more professors like Adams.

Professor Adams’ hilariously titled-letters to his feminist colleagues include:
* “I Found My Thrill in Front of Anita Hill”
* “The Malice Cowboy Cheerleaders”
* “The Society for Cutting Up Men”
* “Madam Ovary”
* “The Feminist Who Stole Christmas”

About the Author
Mike Adams is a criminology professor at the University of North Carolina-Wilmington and one of the nation’s leading critics of the “diversity” movement in academia.