I interrupt my vacation to bring you (a) the latest Rasmussen daily tacking poll for Barack Obama, which now sits at a record low of minus 12, which means he’s failing, which is great news because possibly the public is picking up on his various deceptions, and yet it’s news which the liberal media is totally ignoring.  Hi there CBC, CTV, Global, National Post, Toronto Star, Globe and Mail, and every single other Canadian news media outlet!  Whatchabindoin’?  Cuttin’ Barack some slack?  Covering for him?  Kissing his backside?  Just wonderin’ ‘cause you were all over the stories of his ever-so wondrous and not-at-all liberal media-driven popularity!  So it’s kinda weird seeing you not cover this news properly, thus completely misinforming Canadians in a really repugnant kind of way!  It’s weird, I tell ya!  You betcha!  Wink! 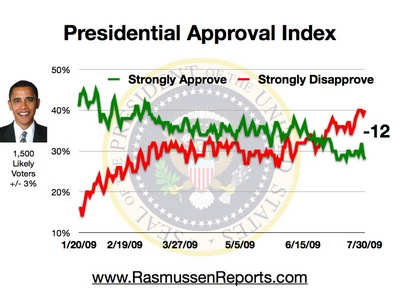 …And (b) I promise I didn’t change the posting time of this blog entry in order to cover up any lies revolving around any liberal or “progressive” Obama/Chicago-machine-style political operatives allegedly feeding deceptive liberal or “progressive” political talking points to the compliant, liberal-owned and Liberal Party-sponsoring media in Canada, in order for the liberal-owned media to obediently and happily create and then change “news” stories (“through the editing process”  —wink!), thus willingly doing the bidding for the liberal “progressive” political party which together with its media, seem capable of dispensing political lies to the Canadian people purely to sucker them into voting for them, so that they can screw them even more for their own political, power, or monetary benefit.  I’m really not almost exactly like a fascist in that way, while others may be.  That’s all I’m saying.

And also, on another topic, (c) I also promise I’m not like the latest incarnation of the despicable old Liberal Party which was the same party responsible for the biggest political corruption story in our nations’ recent history, which is known as the Liberal Party Sponsorship and Total Political Corruption and Immorality Scandal (at least I think that’s “what it’s called”!) —a party which is now totally different inasmuch as it is now under the tutelage of its leader Michael Ignatieff and the likes of Obama/Chicago-machine-style politics hack “strategists” like liberal-leftist bloggers and x-Chretien aids, instead of Jean Chretien or Paul (I didnt know nuttin’) Martin and genius “strategists” like Scott (“beer and popcorn”) Reid, liberal-leftist, uh, political consultant to Liberals.

And also, on another topic (d), I have no interest in totally screwing average Canadians (whom the Liberals, their strategists, and their media supporters hold in utter contempt, it seems to me), and covertly enlisting the Canadian media, who apparently now act as little more than the disseminator of Liberal-left political propaganda and another corporate co-pilot in driving the liberal-left agenda Obama/Chicago-style machine, and then doing things in order to cover up any complicity.  And I’m absolutely sure no Liberals or liberals have done that either, and I’m not winking, I just have an editor in my eye.

I can’t help it if A,B,C, and D, above, all sound similar or related in any way.  During vacations, editing sometimes gets screwed-up, stories and all the facts reported — or not reported at all — correctly, and in “the editing process”, things might come out wrong and things might or might not get added or taken away or they may not clarified just the way I’d like.  And I will “apologize” — or simply lie and cover up — if that is the case. Because I’m honest.

And I’m on Canada’s side.