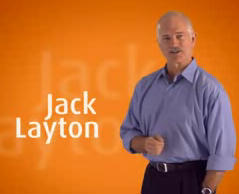 Liberals complained that the candidate for Jack Layton’s you’ve got to be kidding party, Durham, Ontario candidate Andrew McKeever, posted some bad things on his MySpace page.

They say he wrote:

Aside from MySpace, apparently in his FaceBook page (what is this guy—a girl?)  he indicates that his political views are “Baathist”, which is the political party of Saddam Hussein.  Surely the NDP would OK that since they would have Saddam Hussein in power right now if they had it their way…

But he wrote personal comments to folks like these:

“Answer a direct f**king question you c*nt. I can guarantee, if I ever see you face to face I will make you squeal for the same authority you have such a baseless disdain for.”

And this “tolerant” and “compassionate” “progressive” thing:

“Boyd if I ever see you anywhere in Toronto I will kick the sh*t out of you.”

And on July 18, of this year he wrote: “I can say anything I want on here, as long as it is predicated properly, and avoids some of the more obvious subjects.I can type what I like.  I can also (as in this case) copy and save the entire body of this message to cover my ass, should you in fact choose to make an issue out of it.  Which you may or may not.  I would advise you not to bother.”

“You people are f**king knobs.  You can censor me as much as you like.  I will keep posting.  I will not be silenced.  And, you will see, with the passage of time of course.that I will prevail.  Well, not me per se, but one by one the traitorcriminaldesters will be sent back down south to dance the music.”

Sounds like the NDP and Liberal Party and other lefties who try to wreck this place daily!

And the Liberals complain that he lists his hero as “George W. Bush.”

Now, it’s unclear which of these things Liberals find most offensive or weird, or what exactly put the NDP leader Jack Layton over the top and made his candidate quit.  Or whether it was simply the fact that the guy and his opinions were made public.

There’s scant information in the media about this.  Both the Toronto Star and the CBC posted the world’s smallest story about it today.  No reporters have been heard to ask Jack Layton repeatedly, over and over and over again, if this fella’s views “reflect the values and the policies of the New Democratic Party”, or whether this indicates “a possible hidden agenda” for that party, or if Jack Layton “shares his candidate’s views”.  You know, the way they absolutely would have asked Stephen Harper, over, and over, and over…