Leader of you’ve got to be kidding party has the fix: “Urge calm”. Perhaps over tea and buns. 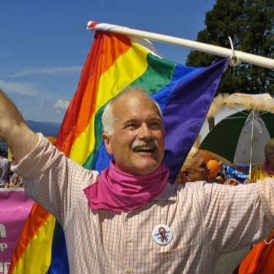 As is usual after a tragic death of a world figure, some of the brightest and some of the most stupid thoughts are brought forth from people of all stripes.

The far-left liberals’ Toronto Star dug this nugget of wisdom out of the leader of the far-left fringe socialist you’ve got to be kidding party, Jack (“ass”) Layton, yesterday, regarding the murder of Benazir Bhutto at the hands of one of those misunderstood Islamist terrorist homicide bombers (with whom Layton has previously counseled world leaders (such as himself!) to sit down and chat over a nice cuppa tea and some buns).

From the Toronto Star today:

…NDP Leader Jack Layton said Ottawa must do what it can to urge calm in the days ahead.

“The people of Pakistan need to know that we’re going to stand with them against horrific violence such as this,” Layton said in an interview.

Just how, exactly, are you going to “stand with them against horrific violence…”, Mr. Layton?  Like you “stood with” the Americans after 9/11—by demanding under no uncertain terms that both they and Canada withdraw from Afghanistan and let the Americans reap what you’d have us believe they sowed?  By bashing the president and labeling him a war criminal and a nutbar and doing much the same against our own country’s leaders?  Layton and the other members of his tea and bun set no more know the real enemy than the state-run CBC knows fair and balanced.

This would be a good time to shake your head if you still think Layton or any of the you’ve got to be kidding party’s tea and bun tribe are to be taken seriously, even for a second.  They want to blame George Bush.  They are actually to blame.  They constantly give more credit and support and encouragement to the enemy (what we know is the real enemy—the Taliban, al-Qaeda, Islamofascists —not George Bush) than they do to our own nations’ fighting troops and leaders.  They constantly embolden the enemy; demand we surrender (on pre-announced dates, yet!); cast aspersions on our war efforts; constantly seek to weaken our resolve; cast shadows of doubt with regard to the nobleness of our mission; demand ludicrous “exit strategies”; and so much more.

And for more on their kind of idiocy, trudge through the Globe and Mail’s John Ibbitson editorial today, which is perhaps the stupidest column of the year—a column built around the brilliant theory that this is all, of course, entirely George Bush’s fault.  This is the quintessential Bush Derangement Syndrome in its most full, oozing, disgrace.

It doesn’t surprise me that the liberals’ media keep propping up the Laytons of the world and their asinine world view, but I do wonder why Canadians keep putting up with it.

I know where the media is.  I know the enemy.  For my part, I’m on Canada’s side.  And I’ve never been a stronger believer in our mission, and the world view of President Bush. 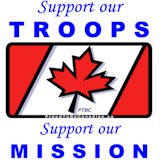