In today’s “I did NOT know that” file: Al Gore: Cigarettes a SIGNIFICANT factor in global warming! 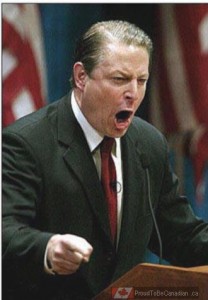 From the Drudge Report this slow newsday morning:

Gore, who was introduced by Secretary-General Kofi Annan, said the world faces a “full-scale climate emergency that threatens the future of civilization on earth.”

Gore showed computer-generated projections of ocean water rushing in to submerge the San Francisco Bay Area, New York City, parts of China, India and other nations, should ice shelves in Antarctica or Greenland melt and slip into the sea.

“The planet itself will do nicely, thank you very much what is at risk is human civilization,” Gore said. After a series of Q& A with the audience, which had little to do with global warming and more about his political future, Annan bid “adios” to Gore.

Then, Gore had his staff opened a stack of cardboard boxes to begin selling his new book, “An Inconvenient Truth, The Planetary Emergency of Global Warming and What We Can Do About It,” $19.95, to the U.N. diplomats.