I actually mentioned before how a liberal signed me up to John Kerry’s Democratic Party newsletter as “Joel JohanaJew”, in their demonstration of their rather obvious rabid Nazi-like racism and abject hate for Jews.  I posted it because it helps expose that famous liberal-left “tolerance” and their quest for “bi-partisanship”, and for “compassion”, and their haughty self-description as the side of “intelligence”, and their quest for “honest debate”, yadda.

But I got another installment today, parts of which read like some other sort of Naziism.  I mean honestly, folks, between the radical left/communists at

MoveOn.org, the far-left Barack Obama web site and its newsletters complete with that freaky Obama orb, and these John Kerry people, it’s downright creepy what these minions say in their emails.

This is the passage that creeps me out the most this morning.  It’s like you’re reading Orwell’s novel Nineteen Eighty-Four, and it’s like the White House wasn’t shamed into finally closing that “report all ‘liars’ to the government” email address which was like so much liberal-leftist fascism.  Today Kerry is on about the “lies” being told in Copencrappin’ (he calls it Copenhagen), and the “lies” are simply what we call our opinions in defence of the sensible side of the “man-made global warming”, um, “debate”. 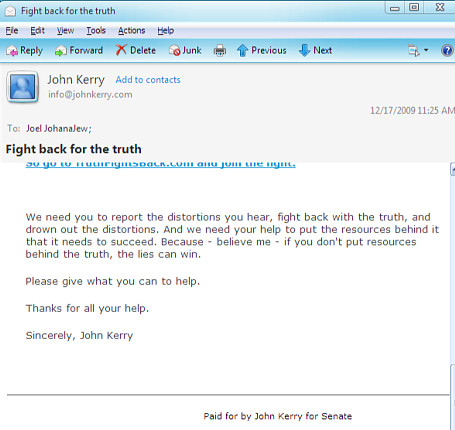 What a disgrace to freedom and democracy these people are.  Which literally forces us to wonder what they really want.