OK Jamie then let’s stamp this myth “BUSTED”!  On their passports!

Liberal (and their media) multi-cult pap:  “Study shows dual citizens no less Canadian”  … Possibly the stupidest and most tendentious “study” conducted so far this year by “expert” liberal-left multi-cult (and Liberal Frenchman Stephane Dion) apologists.  The “study” and the article reporting it ignores those annoying facts that actually strain national attachments, like Canada or Canadian soldiers being attacked by one’s “other” home country, among other such things.

In typical liberal fashion, the “study” measures the “feelings” of those sort of semi-devoted kinda sorta patriotic folks living here. No no seriously: It measures “their expressed ‘sense of belonging’”.  And if I understand correctly, an “I feel like I belong!” yields an “OK then!  No Less Canadian!” stamp of approval from the liberal multi-cult Dion-voting geniuses.

(And therefore it’s a fact.  A consensus.  The science is settled.  The debate is over…)

As if on cue, some folks living in Windsor, in Canada, decided it would be a splendid idea to erect a giant billboard depicting their great leader—the leader of Hezbollah—the terrorist organization which is officially deemed a terrorist organization in Canada.  They say it’s their right as “Canadians”. They left out: “Vote liberal”.  And “death to America”. 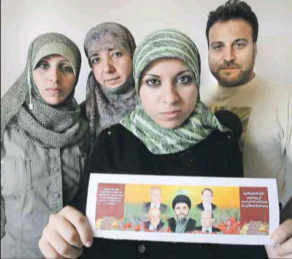 One of the people responsible for a controversial billboard depicting Hezbollah’s leader said he did it to honour freedom fighting families back home—and it’s their Canadian right to do so.

“In Canada we want peace,” said Hussein Dabaja, a Lebanese-born Hezbollah supporter. “We’re not trying offend anybody. We have freedom of speech. It’s a free country. We can do anything. Every Lebanese in Canada has somebody that died in Lebanon, the freedom fighters. Who is Hezbollah? Our brothers, our family, our parents, our friends. We came to Canada and they stayed there to fight.”

The billboard went up Friday at the corner of Wyandotte Street East and Marion Avenue, and immediately drew fire from the Windsor Jewish Community Centre, the Lebanese Christian political group Kataeb and others.

Among other Lebanese leaders, the sign prominently depicts Hassan Nasrallah, the head of the political and military group representing Shia Muslims. Hezbollah, considered a terrorist organization by the Canadian government, was created in 1982 primarily to resist the Israeli occupation of Lebanon that lasted two decades.

“The sign shows the Lebanese community finally got a chance to express their feelings about what is going on, to show respect,” said sign supporter Ayat Choukeir. “Before we were Canadians we were all Lebanese. To see a part of Lebanon in our city makes us really happy.”

Dabaja said the billboard was not meant to be an anti-Jewish statement.

“People who have something against the billboard don’t like Hezbollah and they don’t want peace,” he said.

Dabaja said he’s one of a number of local Lebanese community members who had the idea about seven months ago, after discussing other options to honour people back home that included a candle light vigil.

He said community members and leaders of organizations representing about 700 people settled on the billboard plan. Dabaja said support from people has swelled since the sign went up, including some who stopped by Sunday to take pictures.

He said several of Windsor’s Lebanese citizens will do what it takes to keep the sign up, short of violence.

“The whole community is not going to let anybody take it down,” said Dabaja. “It’s going to stay up until the last minute. If someone comes to take it down, they’re ready to fight for it, to protect it to be up there. We’re not trying to offend anybody.”

Honouring those people is what the billboard is about, he said.

“People living here have family back home and they’re fighting, trying to protect their country,” said Dabaja. “They wanted to respect them, honour them.”

Dabaja said he believes the sign wouldn’t have sparked such controversy if Canada’s government hadn’t labelled Hezbollah a terrorist group.

That is hard for many Lebanese to swallow, he said.

“They keep talking about Nasrallah” said Dabaja. “Nasrallah for us is a red light. It is like saying Jesus is bad.”

What the billboard says:

“Lebanese and Arab communities in Windsor city congratulate the Lebanese people for their steadfastness and endeavor to establish peace in Lebanon.”

In Arabic, according to Hussein Dabaja:

“The Lebanese community and the Arabs in Windsor city congratulates Lebanese people for its patience and to make peace in Lebanon.”

Notwithstanding their blatant threats against Canadians daring to take the sign down, the sign was in fact removed.  Here’s the before and after picture: 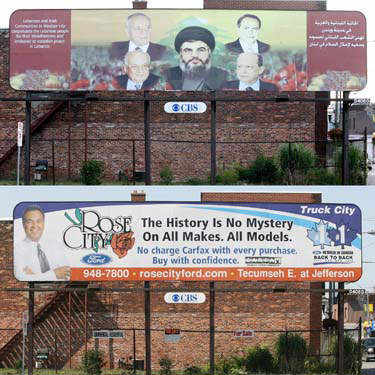 EXTRA
Interesting related twisted story at CNN.com:
Impoverished “Canadian” millionaire widow who lives in dictator-led communist Cuba where Cubans (not Canadians) are “the best people in the world”, despite taking most of her wealth, begs the U.S. —her other home—to free the millions in cash that she left safely in Boston banks.  Wants Canadian politicians to intercede.  Refuses to leave her beloved Cuba apparently.