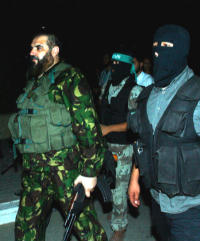 Hamas Terrorist Nizar Rayan with some of his goons.
Image © Ali Ali/epa/Corbis (Flickr)

Apparently based on an Associated Press file which Canadian Press also uses, CTV.ca writes today that Israel has “assassinated” a Hamas terrorist warlord goon (the words “terrorist warlord” and “goon” are of course mine, as the ever so polite and appeasing CTV softens his image by referring to the terrorist goon, with bizarre diplomatic deference, as a “top leader” and as a “senior Hamas official”), whose unthinkably evil life goal was to launch rockets at innocents, send suicide bombers into Israel, kill all Jews, and manifestly wipe Israel off the face of the earth (again, my words, there.  Spot the difference between reality and CTV appeasers).

The media uses all the wrong words.  Is this on purpose?

as·sas·si·nate
tr.v.
1. To murder (a prominent person) by surprise attack, as for political reasons.
2. To destroy or injure treacherously

mur·der
n.
1. The unlawful killing of one human by another, especially with premeditated malice.

mo·ral·i·ty
n.
1. The quality of being in accord with standards of right or good conduct.
2. A system of ideas of right and wrong conduct: religious morality; Christian morality.
3. Virtuous conduct.

treach·er·ous
adj.
1. Marked by betrayal of fidelity, confidence, or trust; perfidious. See Synonyms at faithless.
2. Not to be relied on; not dependable or trustworthy.

Given the meaning of the word “assassinate” and its associated words, I’d have gone with a different word and employed better words, and better phraseology generally.  For example:

The Hamas terrorist goon Nizar Rayan was killed as Israel defended itself once again from the Hamas terrorists’ rocket attacks against Israel, and against that particular terrorist’s ongoing plans to resume Hamas’ oft-used ploy of unthinkable evil: sending suicide bombers—often young boys and girls and mentally handicapped elderly men and women—into busy gathering places in Israel, laden with explosives strapped onto their bodies to be remotely detonated by Islamofascist goons, the purpose of which is to purposely assassinate innocent Israeli children and whole families and cause unspeakable death, injury, mayhem, and terror in Israel.  The terrorist Nizar Rayan is known to advocate the Hamas use of human shields to protect both himself and his goons, or in his words, use “the bodies and souls” of Palestinian civilians (kids, elderly ladies) to protect the houses of “jihad fighters”.  But he then decries the death of Palestinian civilians when Israel defends itself, and your humble correspondent aside, the mainstream liberal media generally buys this specious perfidy up, lock stock and barrel, and “reports” it, possibly with tendentious cause.  Clearly, Nizar Rayan was evil incarnate. …

Or words to that effect.

Even the CBC used the word “killed” instead; and in addition, brought up the salient fact that this particular terrorist goon (whom they, in like-mind,  tendentiously or ignorantly refer to as a “senior Hamas figure”, of course, not wanting to take sides against terrorist goons who seek to kill all Jews indiscriminately) was actually actively plotting the resumption of suicide attacks against Israeli families.  CTV purposely neglected to tell you that bit, prefering to instead inform you that two of his four wives were also killed, as were two of his 12 children —human shields all.  The CBC story, like most in the media, also constantly refers to Palestinian “officials” when they refer to Hamas terrorist goons, in what I see as their ongoing effort at drawing a moral equivalence between the Israelis and the evil terrorist goons of Hamas.

Previous articleTeaching Democrats New Tricks
Next articleLet There Be Dark?