In June of ‘08 Quebec City will hold a Eucharistic Congress but the Vatican has managed to not include Canada in its 2008 travel schedule. Why does Michael Moore never skip Canada and Gore and Clinton can scarcely stay away long enough for the buzz to wear off the glowing, fawning media, and that perpetually sunglassioed cad Bono keeps checking to make sure we’re being good little world citizens (as only he, the rockin’ self-anointed arbiter of good world citizenry knows how), but just when we could use him, the pope finds other places to visit instead of Canada?

For Canadians, there are lots of pluses:  Going to hear the pope speak is cheaper than one of those Gore or Clinton lectures, and considerably more useful to you personally, your whole family, and your country.  And moreover, as a free and important bonus, the religion he speaks of is an actual religion.

Watching Canadian TV, reading our broadcast regulator rattle off a litany of egregious charges of pornography being shown on none other than the state-run CBC; liberals and their media purposely ignoring major surveys conducted every year demonstrating a solid base of support for laws restricting this country’s current “Canadian value” (TM Canada’s liberal-left) of unrestricted, limitless abortion; and liberals attending freakish services honoring the life of a known terrorist from one of the world’s most horrific terror organizations—simply to garner votes from their Canadian resident sympathizers… Canada could use a visit from the pope. 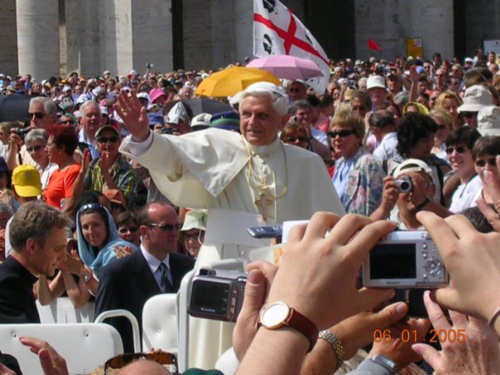 So do as I did and sign the petition at www.pape2008.com.  It’s being promoted by some folks in Quebec, thus the French language, but this rises above tiny language barriers like “prenom” being your first name and “nom” being your last name, and “courriel” being your email addy.

Even Boston Pizza is behind this push and is rallying.  You’d think everyone would be.  The media should really be behind us on this but it seems they haven’t found an interest in it yet.  Only one article appears to have been written about this drive.  Maybe if a few more people were vocal about it, it would encourage them to get on board.  It’s in Canada’s interest to have the pope visit. And regardless of the media, as you all know, I, for one, am on Canada’s side.