CBC Sunday (“news”): The perfect day to talk about the c-word (and I don’t mean Christ) 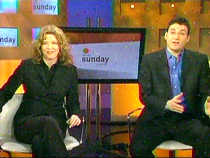 PTBC reader Sammy writes in telling me that today, Sunday, on the liberal-left’s state-owned CBC News program called “Sunday”, the gals (Carole MacNeil and Evan Solomon) are chatting about the far leftist ass Jane Fonda.  As we know, Jane Fonda, who notwithstanding her American-ness, is a “Canadian Value” owing to her being a rabid conservative-hater and Bush-hater and a far leftist and possibly a communism-lover.  Yummy.  Besides, like so many liberals (there and here), she seems to hate America.  So she’s perfect.

She’s in the news this week because on the NBC network’s “Today” show last week, she uttered the word “c_nt”, live for all the folks and their kids to hear with their moms and grandmas, to much giggling from the other gals on the set. [The fantastic NewsBusters.org blog writes it up with video—caution: language].  She was talking about her role in the vulgar feminist tripe called The Vagina Monologues.  (The gaffe went out live to the entire east coast but was bleeped out by the time the west coasters tuned-in.  Show host Meredith Vieira never called her on it, simply laughed, but later apologized on Fonda’s behalf.  Fonda remains unrepentant.)

The state promotes their fabulous upcoming segment about it on the multi-gazillion-dollar state-run CBC.ca which is open to one and all of all ages as follows:

Is it really such a big deal that Jane Fonda said the “C” word on television? We debate whether the movie star and activist broke a taboo that’s outlived its purpose.

And golly, how “progressive” of the liberals and socialists at the CBC. You see, we’re baited by the state that we should really question whether it’s actually such a big deal to break down yet another barrier to decency, now that the left has broken down just about all but not quite of them yet.  And it’s established that perhaps not saying vile, disgusting things on public television has “outlived its purpose”.  Let’s chat about it amongst our families on “Family Day”!

Hey by the way, the state?  They’re the ones who want to mandate a national, universal taxpayer-paid state-run child care (and “early learning” —wink!) social program and look after your kids, so as to set your children up right and “progressive”! (…and learn ‘em to be reliant on the state from age 2 onward, which is a “Canadian Value”… and perhaps learn all about the c-word!…)

Anyway, I replied to Sammy saying that I think the “Canadian Value”-promoting CBC would rather have Canadian families talk about that c-word rather than what they consider to be the other C-word that some families talk about on Sunday, like at church. That C-word is absolutely verboten. Especially on Sunday.  And especially on the state-owned media, “church ‘n state”, and all.

State-owned and state-run media should be banned in this country, and that notion enshrined in our constitution.

EXTRA:
Coincidentally, they invited “our” columnist Barbara Kay, who is good and conservative (and an expert at language and literature and so on, and brilliant), who of course objected to the use of the word on TV and explained why very well.  And as the CBC and other liberal-left media nearly always does, they of course felt the need to buttress and debate and buffer and filter her good words with none other than a very “progressive” sex columnist.  A sex columnist would, apparently, according to the CBC, have something of value to add to the lovely Sunday morning chat for our families.  She didn’t.  She thought using the word was terrific.

Previous articleCollege Presidents: How Many Students Have to Die Before You Allow Guns on Your Campus?
Next articleThe other c-word