I don’t think I’ve ever seen such a massive protest in my life, with the possible exceptions of when Ronald Regan said “tear down this wall” and, duly encouraged, the people rose up and Ronald Reagan won the cold war; and the solidarity uprising in Poland, and one or two others.

Anytime people march in such vast numbers—anywhere in the world —it’s a major story.  It doesn’t matter where it occurred.  So when the media doesn’t cover it (as I demonstrated many weren’t, yesterday), they’re covering up something.  When they bury the story, they’re similarly covering up something.  When they misstate facts and clearly understate the numbers of protesters or marchers against the government, they’re misleading you.  Any way you slice it, it’s corrupt. And you should protest it.

Following up on my blogging yesterday about deceptive reporting in the liberal mainstream media, in which they alternately reported that “thousands” attended an “angry” protest, some media like the Daily Mail in the U.K. actually found the crowd numbering upwards of two million.  It’s could have been a reasonable guess just based on looking at the overhead photos, one of which I showed you yesterday.  I personally suspect the Daily Mail overstated it just based on the calculus used to figure the size of the crowd on Obama’s inauguration, which was similar in size. 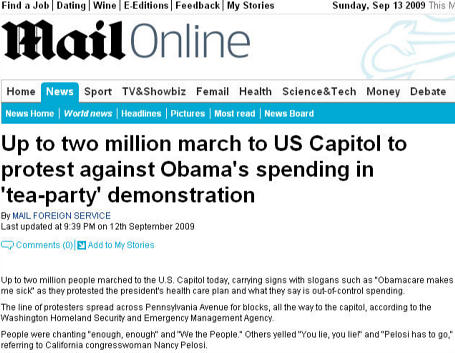 But to say in your news report, which several news outlets did, that the numbers were in the “thousands”, is just a plain lie.  You have to be stridently trying to lie to your readers and viewers to tell them that the crown was in “the thousands”.  Even if you said “tens of thousands”, you

have to be kidding yourself, and/or your readers and viewers.  Say “400,000” when it’s clearly more, and still you’re playing cute with facts.  “Thousands”?  Who are you trying to kid/mislead?

The picture I showed you yesterday was NBC News’ own picture, and even while they showed that picture in a split screen with their reporter in the “angry” “mob” of “neocons” crowd in which they were all smiling and cheering and having fun with their kids and grandma in toe, the reporter was trying to get away with saying the crowd numbered in “the thousands”.  The anchor herself disputed that since she knew all the viewers were looking right at the other side of the screen in which it was pretty obvious there was more like a MILLION people there.  The reporter allowed that “some say there may be tens of thousands”.  He accidentally underestimated the size of the crowd by upwards of ten or twenty thousand percent.  That’s 20,000%.  I was actually embarrassed for the media at that moment (then it went away).

Hilariously, in another NBC News report yesterday, the anchor introduced the story by saying that “tens of thousands” were there, but then their own reporters on the scene reported that their own estimates, there were clearly “hundreds of thousands”.  And that was on the NBC division of the Obamamedia.  So you can imagine the truth to be that there were actually a good MILLION people there.  Watch that clip right here. 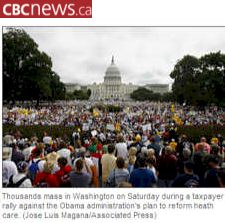 CBC reported that “tens of thousands” attended the massive protest, and they totally buried their so-called “coverage” of the news event under the hilarious headline “Obama vows health plan will work”.  Their idiotic new story includes a photo of the crowd with the caption ”Thousands mass in Washington on Saturday during a taxpayer rally against the Obama administration’s plan to reform heath care.”

I have a dozens more examples.  How many do you need?

This reaction from our “beloved’ MSM is par for the course and is precisely why they are being ignored more and more.  I can’t believe they still can’t figure out why more and more people are flocking to Fox and various blogs for their news it’s because of this immensely biased behavior.  They claimed last year ‘Hope and Change’ meant that politics and it’s associated rhetoric would not happen anymore as this needed to occur.  Hmmm, wonder how that’s going.  They should just keep on doing this as it only render’s them more and more useless with each passing day.  And when they are gone I won’t shed a tear.

Montreal Gazette buried the Washington demonstration story within a story about Obama’s rally in Minneapolis.

They talked about his 15,000 roaring and cheering fans, and then ,very briefly, mentioned the demo in Washington.

They didn’t give any crowd estimate at all, simply refering to “demonstrators crammed onto the west lawn of the capitol..”

I didn’t check the French papers as they were too busy covering the 250th anniversary of the battle of the Plains of Abraham.

Previous article
The arrogance of rewriting the rules
Next article
What the…? Tories resurrect Court Challenges Program