Haven’t written about the CBC’s The Hour in a while because there’s so much other hate and salacious crap to cover at the CBC, I can’t keep up….

The state-owned CBC show The Hour, starring George Stroumboulopoulos, is apparently a show geared toward Canada’s young useful idiots, and seems to be meant as what the CBC suits must think is a groovy way to breed more of them;    to indoctrinate Canada’s youth to the liberal-left anti-Bush anti-America and anti-conservative world view.  A sort of “early learning” (—wink!) entertainment program.  Judging by the laughter in the audience at the mention of each Bush-bashing or conservative-bashing “joke”, they’re all on board, and it’s all working out marvelously.

It was shown today on the CBC Newsworld channel (it’s “news”!) at the hour of 2:00 PM PT.  When all the kids can watch it at home.  It’s great now that the kids are out of school.

George Stroumboulopoulos proceeds to do a “comedy” piece in which he shows a Islamist jihadist cartoon which is routinely played in the middle east for the kids, which is clearly used to indoctrinate the kids there… to hate George Bush and America and the West in general and engage in Islamic jihad. 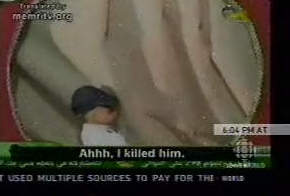 This indoctrination is a serious threat, actually, it’s not a joke of course.  But George Stroumboulopoulos makes it a joke, this cartoon in which one character kills George Bush at the end (and The Hour audience laughs uproariously as egged-on by Stroumboulopoulos).

Demonstrating his simple-mindedness, Stroumboulopoulos makes out like conservatives who speak out against this kind of crap should all just “chill:”, and “take a pill”, and “relax”, because after all, this is all just a joke—a cartoon—not unlike the Roadrunner cartoon.  He seems to completely fail to grasp —or at best he butters up— the notion that the cartoon is actually one that is designed to indoctrinate children in the middle east —it’s their own “early learning” (—wink!) program to get the kids to grow up hating the West and hating America and hating George Bush, and that they should kill Westerners in an Islamic jihad.

Stroumboulopoulos:  ”… Obviously it’s a pretty dickish move to brainwash your kids to kill people … But I know that a lot of American network people were going off on this one, yer

, so I mean it’s important for The Hour to take a stand on a show like this.  We here on our program do not advocate the killing of anyone on a kids’ show, unless it’s death by anvil or a piano falling from a cliff.”

The cartoon is shown on a television station operated by Hamas—the Islamic Palestinian terrorist organization.  (Find it at Memritv.org or YouTube?).  And a sidebar question:  Is it CBC policy to mock and denigrate personalities at competing networks?  Is that in the national interest?  (Seeing as it’s Fox News Channel personalities, I imagine it’s another one of their “Canadian Values”).

Later, Stroumboulopoulos does a “news” segment—it’s of course news of interest to the his target audience—the useful idiot MTV set.

• “…Stevo [of “Jackass” movie fame] has sent out an email to his friends and loved ones apologizing for hurting them with what he calls quote, a bunch of manic bullsh*t

[with Stroumboulopoulos saying the full word] 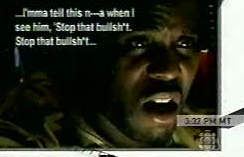 • “…In a recent interview, DMX claimed he had no idea who Barack Obama is!!  Never heard of him!!  And I quote, quote…  I’mma tell this blank when I see him, stop that bullsh*t

[the on-screen graphic had the word typed as I did, as you can see from the screen capture at left, but George Stroumboulopoulos said the whole word on air anyway], stop that bullsh*t [saying the whole word again on air even though the graphic had it edited out]

• “…But seriously, Mel went on to say, I knew this girl was in trouble, so I sat down with her, and looked into those say eyes, and said, how can I help you, sugar tits?”

• “…remember that time you were supposed to stick a Taser up my ass and electrocute my colon, but you got so high didn’t show up, so Kevin the sound guy had to do it?…

And so it went.

The CBC:  Good family and Canadian values.  On your dime.

Even the very liberal and anti-Bush and not-at-all pro-American MSNBC news network, which is prone to mock and make “comedic” jokes about Bush whenever possible, reviewed that same cartoon …with utter disgust.