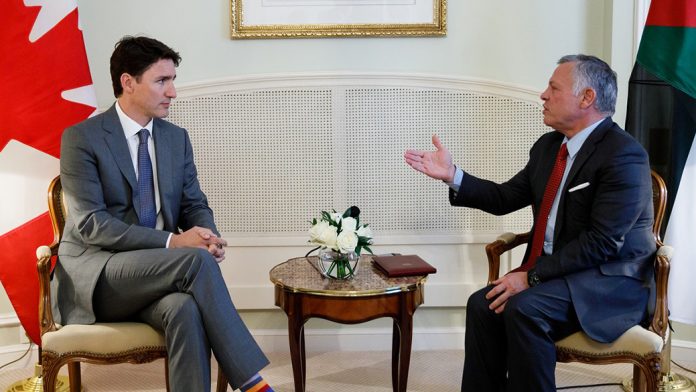 The Toronto Star reports that over the past ten years, “Canada” (that’s you, taxpayer!) has sent nearly $800 MILLION of your tax dollars to… Jordan. Why? Well, the Star misexplains it, but my guess is that some people in the Canadian government figure Canada has too much money, there is no need for it here, and, so, “Canada” has to constantly unload a giant boatload of it to other countries. To Jordan, for example.

The Toronto Star has joined The Wall Street Journal and many others in reporting on the so-called Pandora Papers which reveal that national “leaders” like Jordan’s King Abdullah II bin Al-Hussein, among hundreds of others, used offshore tax accounts and spent triple-digit millions on personal luxury goods like California mansions —while receiving our taxpayer dollars.

As his Middle Eastern monarchy strained under the weight of regional wars, Arab Spring protests and a flood of refugees, the King of Jordan secretly stockpiled a real estate portfolio of luxury homes from California to London, an investigation by the Star and its international partners has found.

King Abdullah II bin Al-Hussein acquired 14 properties abroad worth more than $106 million (U.S.) using some of his 36 shell companies based in secretive tax havens, a cache of newly leaked documents reveal. He did it at a time when Canada and other Western nations were sending billions of dollars in humanitarian assistance to Jordan.

(You’ll need a subscription to read the rest but I’ve gone through it. The more intelligent WSJ offers free links.)

So what in the world was all our taxpayer money supporting in Jordan? Well, specifically, according to my own review of Canada’s multi-billion-dollar Canadian government website which explains it, we taxpayers are “Providing gender-responsive, needs-based humanitarian assistance to crises-affected populations,” for one thing.

“Gender-responsive.” I’ll say it for you: What?  The money will help the Jordanian government respond to genders? Maybe that’s a liberal or progressive or woke thing, but it translates to utter bullshit when using any science or English dictionary.

• “[S]exual and reproductive health services.” Or to put it the way liberals and progressives never put it because their PR marketers and focus groups have told them not to put it this way: abortions. Bad enough taxpayers pay for Canadian women’s abortions (an elective, and often cosmetic procedure having nothing to do with “health” — particularly the baby’s), but we’re also paying for Jordanian abortions.

• “Helping set the conditions for a prosperous, secure, inclusive, gender equitable and stable future.” Liberals and progressives and the woke cannot speak for more than 13 seconds without saying “inclusive” and “gender equitable.” Also “climate crisis.”

• “[S]upport that empowers women and youth, and invest in renewable energy to create green jobs …”.  So yeah, also the word “empowers.” They love them some “empowerment” (as long as it is empowering non-conservatives, and non-white men, and apparently Canadians, that is).

…And the page goes on like this, every other word another trendy left-wing ideological trope. And yet this is how the Liberals’ very own Toronto Star succinctly puts all that in their article, in a mischaracterization to beat hell:

That’s what you call a gratuitous whitewash, and it is to help clean up the muck I laid out above. Not help you, mind you — since you’re clearly less informed or even misinformed by reading that.  No, it’s to help the Liberal government. Despite it being 800 MILLION dollars, nary any allusion do they give to the woke gibberish their beloved Liberal government’s own website describes — abortions or “reproductive health care” (a just can’t make those scare-quotes big enough), “inclusiveness,” “empowerment,” “enhancing the resilience of government institutions,” “renewable energy,” “green jobs,” nor even “gender-responsiveness” — to be found.

The Panama Papers reveal a lot of gossipy material, which people who love to wag their index finger at others will really enjoy. It deals with wealthy people — and if there’s one thing liberals and progressive Canadians just hate, it’s wealthy people —who aren’t them. But to me, that’s all largely a distraction. The far bigger issue is the Canadian government sending hundreds of millions of our taxpayers’ dollars to nations (and there are lots of them) with obviously dubious governments, and dubious if any accountability, and dubious human rights records, or even any sound governing principles; and doing it for dubious, overtly partisan, politically ideological reasons — such as the reasons as explained in their woke-speak at Canada’s own website.

The Star chose to finger-wag, and instead of being serious and addressing the real issues, they obfuscated and covered for their beloved government.

To its credit, the Star offers this as an apparent laugh line: “King Abdullah, who awards an annual eponymous prize for transparency, purchased the homes between 2003 and 2017.” The Star will not be awarded the prize.