A CAF chart shows how two North American countries fared over ten years. Canada declined rather dramatically since 2015 after increasing before that; and the USA increasing sharply since 2017 after falling just before that. 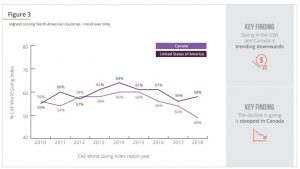 China placed dead last in the world — go communism! We’ll cover for ya! — ahead of Greece, Yemen, and some former Soviet states including Russia.