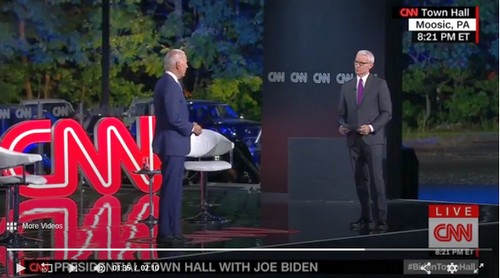 “If the president had done his job, had done his job from the beginning, all the people would still be alive. All the people — I’m not making this up. Just look at the data. Look at the data.”
—Joe Biden, Sunday, September 20, 2020, after which “news” anchor Anderson Cooper of CNN just stood there and accepted it as fact, which is actually a more important part of this story than Biden’s idiocy.

Yes Joe Biden was making it up in his head. He made an idiot out of himself. Again. That is the data.

Also, see —and this is true by Biden’s logical extension and implication (look at the data, look at the data!): if Biden were president, there would be zero deaths from the China Virus. Zero. Not one death. In fact, America would be healthier, stronger, richer than it was before the China Virus was imported into America! It’s truly astounding the effect that Biden would have on America. Almost like Barrack Obama’s God-like ability to lower the rising seas if he were elected president in 2008 (actual quote: “This was the moment when the rise of the oceans began to slow, and our planet began to heal.”) Turns out Obama was also “making it up.” Also known as “lying.”

But that Trump. Why, he’s responsible for every death. Every one. Cancer too.

(Don’t worry, liberals and lefties: Justin Trudeau is not responsible for the over 9,200 deaths in Canada — and still growing — in that same way as Trump is. In fact, Canadian deaths are because of Trump too. Data! Science!)

This past weekend, Biden claimed that it is “estimated that 200 MILLION people have died” from the China Virus in America. 200 MILLION American people, in America. Mind you, that was apparently only “estimated,” so it could be a different number (spoiler alert: it is).  Clear-headed people know that the number is actually 895 bashmillion.

Reading off his teleprompter: “If Donald Trump has his way, the complications from COVID-19, which are well beyond what they should be, it’s estimated that 200 million people have died, probably by the time I finish this talk,” Biden said in Philadelphia at a well-rehearsed event.

Earlier this year, he said 120 MILLION deaths had occurred in America. He meant 120,000. But let’s not nitpick. He was only off by a factor of one thousand times. “People don’t have a job, people don’t know where to go, they don’t know what to do,” he said. “Now we have over 120 million dead from COVID.” Again, if he were president, not only would those people still be alive, they would have grown extra thick, luminous hair, and extra muscles.

Back in February, Biden said 150 MILLION Americans had died from gun violence since 2007. That’s nearly half the American population. Not accurate. The real number is 962 chibababillion.