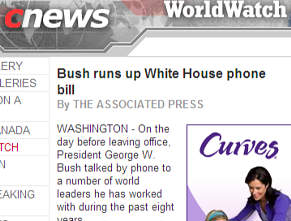 Cnews.canoe.ca, using an Ass. Press file to bash Bush as he leaves office, reports today on President Bush’s phone bill, in what I guess they would like you to think of as one last “war crime”  or “crime against humanity”.

Their headline:  “Bush runs up White House phone bill”.  Apparently he had the gall to phone world leaders as he leaves office.  And in this economy, that’s an outrageous waste of cash which could otherwise be spent on giving raises to Hollywood actors and creating socialist programs to make citizens rely on government for their lives.

ABC News.com is on the story of Obama’s huge inauguration party tab, which most media ignore because they heart Obama.  (When Bush was inaugurated, the media absolutely lambasted him for spending …a far lesser amount.)

What Recession? The $170 Million Inauguration
Obama’s Inauguration Has Been Financed Partially by Bailed-Out Wall Street Executives

… The biggest group of donors were none other than the recently bailed-out Wall Street executives and employees.

“The finance sector is well represented, despite its recent troubles,” Ritsch said. “Those who worked in finance still managed to pull together nearly $7 million for the inauguration.”

… Billionaire investor George Soros and his family contributed $250,000 to the inauguration

Cnews.canoe.ca is covering the big lavish Obama party today on their front page, but fails to mention anything about the lavish bill which I thought they’d be so concerned about.  They do include an article written in one of the Sun Media papers by obvious (but unattributed as such) liberal-leftist reporter and opinionator Lisa Van Dusen.  The journalist Lisa Van Dusen is more than just a run-of-the-mill liberal and Obama-supporter-journalist like almost all others are —she was actually an Obama campaign worker between being a liberal-left political opinion columnist and reporter for the Sun media chain.  She spent January, 2008, volunteering for the Obama campaign in South Carolina.  The liberals media should really be more upfront about things like that.  They purposely aren’t. 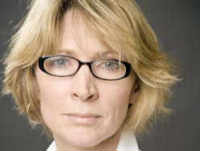 In her article today (and note that it in no way speaks of being an opinion column so we are to assume it to be a news item), she takes a less than nuanced swipe and parting shot at George Bush, by way of a reference to cowboys, of all things, as if, like those bigoted elitist Canadians from Toronto, she thinks the mere mention of cowboys are the perfect negative stereotype and will evoke that perfect negative or even humorous connotation as totally stupid buffoons and hicks.  And of course—as if we didn’t know—we are soon clued-in:  cowboys are a direct link to that lame George Bush, dumb-ass cowboy, if I understand her and all liberals correctly.  But moreover, Van Dusen seems to trumpet Obama’s ability to draw Hollywood and MTV star-power—as if that’s a measure of the quality of the man—compared to Bush’s dearth of Hollywood and MTV star power.  This, on the same page that they bash Bush’s phone bill:

… On the steps of the Lincoln Memorial yesterday during the pre-inaugural concert for Barack and Michelle Obama, the only cowboy hat in evidence was on Garth Brooks and he led a singalong of American Pie and the Isley Brothers’ Shout with a gospel choir. (During Shout, people all the way up the National Mall to the Washington monument did the traditional Shout dance in unison.)

Yesterday, Bruce Springsteen performed with a choir, Sheryl Crow and Herbie Hancock did Bob Marley’s One Love, Usher, Shakira and Stevie Wonder performed Higher Ground while the first-couple-to-be got up and grooved along. Actor Jack Black paid tribute to Teddy Roosevelt.

In what must also have been a change from previous inaugural events, the crowds along the Mall watching the concert on Jumbotrons clapped for Bono, Beyonce and Denzel Washington but went wild every time the cameras cut to the president-elect. … 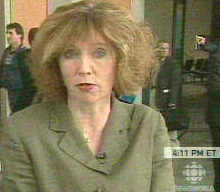 Lisa Van Dusen’s hairy sister is the politics reporter on the state-owned CBC, Julie Van Dusen, where she routinely tears apart conservatives, typically bringing up possible Conservative Party “hidden agendas” and perceived contradictions, and of course the faux “threat” that Conservatives will make abortion—I’m not sure—less popular or something, as her apparent goal in her journalistic life (I have ten video tapes of her bringing up abortion about 8,000 times during Harper’s first election campaign).  It seems Lisa and Julie are two peas in a pod. Brother Peter works for the CPAC channel as a politics anchor covering Question Period and such.