The many anti-Israel rallies across North America a week ago on December 30 were meant to appear as spontaneous groundswells of rage and anger at Israel by common folks.  But of course they were actually well organized by the usual far-left and anarchist loons and agitators, with the one in Toronto allegedly being organized with the help of the Canadian Union of Public Employees (CUPE) Ontario and its leader, Sid Ryan (who as I wrote yesterday, demanded this week that Israelis be banned from Ontario schools).

The rallies brought out their best and brightest, like this thinker in Fort Lauderdale’s rally (corrected from original – protester was in Ft. Lauderdale, Florida, not New York as originally posted):

“Go back to the oven,” she shouted, calling for the counter-protesters to die in the manner that the Nazis used to exterminate Jews during the Holocaust.

“You need a big oven, that’s what you need,” she yelled.

Also see the column by the brilliant columnist and author of Liberal Fascism: The Secret History of the American Left, From Mussolini to the Politics of Change

The rally in Toronto went equally as well, as reported by the blog Jihad Watch:

Che and Jihad in Toronto

…I was told that CUPE (Canadian Union of Public Employees) was one of the organizers of the anti-Israel protest. Sure enough, I ran into CUPE President Sid Ryan, sitting comfortably in the back of a coffee shop near the Israeli consulate. I spoke to him; he noted my Israeli flag and was quite unfriendly. My, he looks wealthy. Hey, CUPE members: your union dues hard at work, fomenting Jew-hatred and giving Sid Ryan a lovely gloss. Our conversation went like this:

Me: “You’re with the rally today.”

Me (smiling broadly and raising my flag): “Go, Israel!”

With that, I walked away.

Here are some scenes (from Flickr) of the Toronto rally:

As usual there are the communists and socialists.  Does any rally in Canada not include these leftists with their Socialist Worker placards and their flags glorifying Cuba’s communist murderer and Fidel Castro partner Che Guevara? 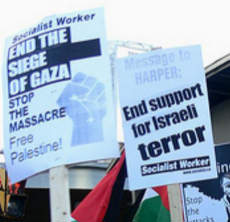 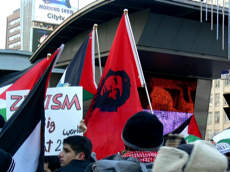 Speaking of socialists and communists, here’s Sid Ryan’s CUPE flags (below) alongside the other communist party flags and so on. 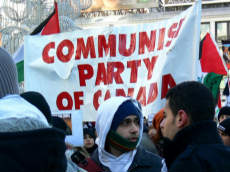 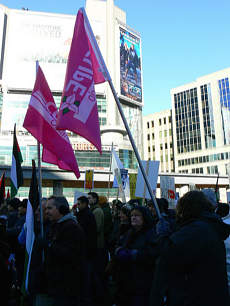 I wasn’t familiar with the group “International Bolshevik Tendency” (see below), so I looked them up, because I imagine I’ll soon see one of their representatives being interviewed on our state-owned CBC, as yet another one of their guest “experts” on the conflict in Gaza (whom they’ll identify only as “human rights research analysts”, or present as “Family Stories”, or some such thing, such as I’ve caught them doing in the past week).  International Bolshevik Tendency (IBT) is apparently “a revolutionary socialist organization founded by former cadres of the international Spartacist tendency (today the International Communist League).” 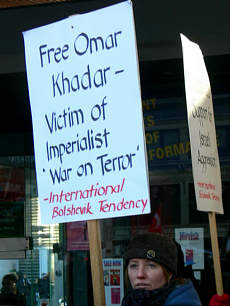 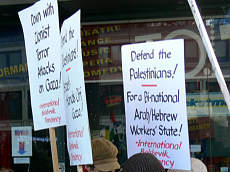 In San Francisco things went exactly the same way, as reported in the At the back of the hill blog:

Apparently, I am a Jew Faggot. This per a large very dark gentleman representing International ANSWER, organizers of yesterday’s protest in front of the Israeli Consulate on Montgomery Street.

But the group he represented is not the point. He was utterly convinced that I was a Jew Faggot, and very vocal about it. He does not appear to much like Jew Faggots.

I have no problem with the term, so it is with profound humility and pride that I accept the appellation ‘Jew Faggot’ as a badge of honour.

I was also informed by several other supporters of the Palestinian cause that I was a dog, a pig, a monkey, inhuman, the son of a whore, and that I deserved to be shot, gutted, slashed open, have my children killed, and see my wife raped.
[Given that I am, apparently, a Jew Faggot, it is not clear what is meant by the term ‘wife’ – explication is required. Thank you.]

The anti-Israel side had one slogan in English, and several more in Arabic.

The English-language slogan: “Palestine will be free, from the river to the sea” – which frankly states the intent to destroy the Jewish state and ethnically cleanse the land.

The Arabic slogans: “Itbach al Yahud” (slaughter the Jews), “Falastin balad’na w’al Yahud qalab’na” (Palestine is our land and the Jews are our dogs), “ba ruh, ba dam, nafdeek ya Falastin” (with our soul, with our blood, we will cleanse you oh Palestine), “al mawt al Yahud” (death to the Jews), “Khaybar Khaybar ya Yahud, jaish-Muhammad saya’ud” (Khaybar Khaybar oh Jews, the army of Muhammad will return).

No, they do NOT have plausible deniability – the ‘river to the sea’ slogan shows that they wish for a genocide against Israel, and translations of the Arabic slogans have been provided so many times that they cannot claim ignorance of the meanings.

Besides, the angry Middle-Eastern Jew-hater with a bullhorn, and the rabid white chick with an equally loud bullhorn and a grating voice, made plain in great detail what the peace movement’s plan for Israel and the Jews entails, as did the numerous threats and insults directed at our side by both Arabs and Anglos…

“Associate with men of good quality if you esteem your own reputation; for it is better to be alone than in bad company.”
— George Washington