The CBC Prez: We did NOT have sexuality on that network, the CBC (except testicle waxing…)

[UPDATE: Since this post was written (back in 2006), the site on which the CBC displayed the videos mentioned here have been shut down. If we can take some credit for that, we will, very happily.]

Now that the Chairman of the CBC has, in a hilarious twist, been relieved of his job following repeated comments he made about relieving himself, we are being asked to eat a fecal movement by the President (and temporary Chairman) of the CBC, in which he seeks to relieve the CBC in other ways.

OK.  Maybe today, Thursday, he could address the issue of the video flick on the CBC (still at CBC.ca today!) about the kids getting their testicles waxed, in a flick called “Ball Waxer”, in which they show a CBC-shot video about a kid getting his balls waxed.  Oh sure I know, it has little to do with “sex”, any more than Bill Clinton having sex with that woman, Miss Lewinsky, that is, her performing oral sex on his sexual organs in his office… was about sex or sex organs.  And reality TV?  It was and is surreal that we pay for this crap.  So he’s right.

Here’s an excerpt from a blog entry I made back in February about the CBC’s “Ball Waxer” literally unreal reality programming involving sex organs of young people for the benefit of all Canadians (there’s other prime examples there too): 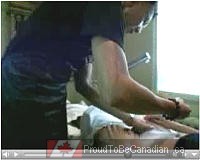 Young teen boy goes to a waxing parlour to get his balls waxed.  CBC camera man follows boy into parlour where the waxer asks him how often he shaves his balls.  He answers, “I guess I shave my balls about once a week…”.

He’s then asked to drops his pants, and he lies on the “operating” table.  All of this is captured by the astute CBC cameraman who is employed by the state with your tax dollars.

The waxer then proceeds to wax his balls while the CBC camera films the event for the youth of our country at taxpayers’ expense.

They hope you and your children learn some of those liberal “Canadian values” from this.

It really depends how much crap you think Canadians can stand, I guess.

Speaking of things coming out of anuses, there was this one CBC film that depicted a pickle coming out of the anus of a young girl.  Of course, she was, in her apparently (to me) totally drugged-out state, talking about stuck-up people.  That’s ironic, see?  Not sex!  It’s all very tasteful, inasmuch as it involved pickles.  And as we know, pickles are yummy.  And coincidentally, the young apparently high girl is named “Peaches”.  Yummy tasteful Peaches. 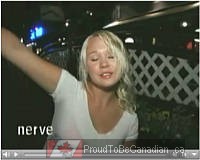 A mid-teens girl who appears to me to be completely strung out on drugs talks about people who are all, you know, like “judgmental” and stuff.  Like yuck.

She says that judgmental people should “take that pickle right out of your ass”.

She then demonstrates how exactly that might actually look, if they were to pull a pickle out of their ass, as she turns around, and the CBC cameraman zooms in her said “ass” and the demonstration occurs.

She pushes a pencil through the front of her jeans and pulls it out the back, as if to portray a pickle being extracted from her ass.

I prefer them out of a jar, personally, thanks.  But my my this was tasteful.  No doubt.

But let’s “progress” up to today’s story again:

[…] Although Rabinovitch had told the committee last October that the public broadcaster did “not do reality programming,’’ he explained that the CBC has already done and plans to continue shows with “redeeming graces,” such as the Greatest Canadian and Hockeyville.

That flick about the young man (boy?) running around in a public parking lot on the CBC sure was redeeming and graceful, inasmuch as it involved God’s creation which speaks of redemption and grace, I guess, but I know I know “church and state!”, “church and state!” (™liberal-left), that’s quite a stretch.  A fully naked young man running around fully naked isn’t redeeming to most folks, and yet it’s CBC fare.  And yet they don’t “do” this sort of thing.  Smell the feces! 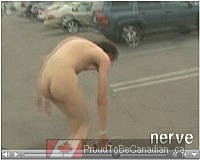 A young mid-teens boy in a nearly full public parking lot—with people present—screeches like Howard Dean to the CBC camera, yelling that he doesn’t “believe in clothes”.

The CBC camera follows him running around the parking lot completely naked, often zoomed-in on his butt.

Let’s get the exact quote again from today:

“What we will not (broadcast) is shows like Fear Factor, Extreme Makeover, Survivor particular shows that stress plastic surgery, sex … eating of insects,” said Rabinovitch, who was questioned about the decision by NDP heritage critic Charlie Angus. “I just think we have to do our shows much more carefully and with taste.”

How about the flick about cramming meat hooks into the back of a man, and then hanging that man from meat hooks in a rave bar?  That was tasteful—it has to do with meat, see!  That’s your state-run CBC pooing on you. 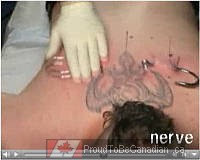 Shows a tattooed young man who goes to a skanky body-piercing parlour, and gets his back pierced—with giant meat hooks.  Then the CBC shows that man being hung like meat—from his new meat hooks which are pierced into his back—and swinging back and forth from those meat hooks, in a public bar of some kind.

The CBC thought this was good stuff to help normalize our youth to the values of getting giant meat hooks installed into your kids’ backs, then of course hanging like meat in rave bars.  Simple piercings in the eye-lids, nose, lips, tongue, nipples, and sex organs…. are simply passé now.  The CBC news host George Stroumboulopoulos with all his face piercings is “lame” now by comparison.

That’s fantastic.  How about that “art”  “film” (you know “art”—that’s what liberals call pure crap that is taxpayer-funded) called Cashback (read my blog entry about that here) that they still inexplicably promote to this day on their web site even though it’s a film that was shown on their now cancelled (due to lack of…. what?) “Zed” program.  This film features fully nude women with shaved sex organs close-up, from the front and rear!  The young boys just love this stuff.

I wrote a blog entry about that “Zed” show which included this excerpt:

And here’s more from today’s news article in which they question nothing of this man, indicating to me that they are taking a position in his favor and that of the CBC:

[…] The Conservative government has postponed a review of the CBC’s mandate until an ongoing CRTC study concludes in December on the impact of new technologies in the broadcasting industry. Rabinovitch said the review is essential to re-evaluate the role of public broadcasting in the future.

By “re-evaluate the role”, you can be sure he’s not talking about the toilet paper roll as he should be.  But watch the CBC’s Passionate Eye enough, and you’ll want to keep a roll handy to wipe down your TV screen or the floor beneath it.

And from the state-run CBC.ca web site itself:

Faced with this unstable situation, the senior managers are calling for a long-term funding commitment from the federal government, for instance a 10-year funding plan versus the current system of year-to-year approval.

Other suggestions they made to the Canadian Heritage committee include regular mandate reviews and the ability to collect fees from cable and satellite subscribers.

I don’t even know what that means.  But I can assure you, it’s fecal.

** Depraved programming accessible to our nation’s kids; brought to you by…

** LifeSite follows up on my exposé of “nerve”

** CBC is the depraved channel

Clearly, this is another good time to remind readers that state-run and state-owned media should be banned in this country, and it should be enshrined as such in our Constitution.

Previous article
Feminists can be their own worst enemy
Next article
Wear red Friday!