Is it any wonder the socialists like the NDP poll so well? Well it’s been a long road. And with the liberal media’s help, it’s working. As I’ve been warning for years.

Every day brings us more examples of a progressive government and media-driven agenda of blurring what should be blatant lines of demarcation between government and its state-owned, state-run divisions posing as “corporations,” which operate in (and wreck) the marketplace  —  and real, regular old free-market, free-enterprise, capitalist corporations.

It’s deception at work, by progressives in government and media, and as I’ve pointed out before, academia.

Calling what are de facto state-owned, state-run government departments or agencies “corporations” is pure  —  and purposeful —  deception. Slight of hand. Fakery. And they all know it. 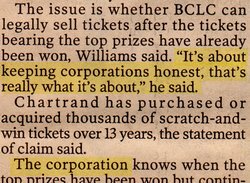 state-run gambling syndicate which scams citizens into gambling away their after-tax cash in casinos, and buying their lottery tickets. The media wrote up his main talking point perfectly (for their purposes), quoting the citizen as saying this: “It’s about keeping corporations honest, that’s really what it’s about.”

Government divisions posing as if they’re “corporations” should be pointed out and their place in a free-market capitalist democracy questioned by the media at every possible opportunity. Not covered-up or glossed-over or white-washed or ignored, at every opportunity. They shouldn’t aid and abet the scam.

Today the story is about another socialist venture. It’s the 100% state-owned, state-run car insurance monopoly deceptively called the “Insurance Corporation of BC” (ICBC). It was “incorporated” by a socialist NDP government years ago, which took over the car insurance industry, and which has been nurtured and exponentially enlarged by successive progressive-left liberal governments to this very day. With no end in sight.

The government’s car insurance workers’ union has voted to go on strike, yet again. That strike is not even my point here, but I hope they never settle the strike, ever, which might help drive my point home (pun intended) until the socialist/fascist farce comes crashing to a halt.

Throughout their reporting, the media refers to ICBC as “the corporation”  —  as if it’s another normal capitalist, free-enterprise, free-market corporate entity, competing in the free marketplace, like Coke and Microsoft.

In fact in this Canadian Press story posted at CTV’s web site, as usual, the world “government” doesn’t even appear, even though it’s ALL ABOUT government, and not about any normal “corporation.”

ICBC workers’ union issues 72-hour strike notice
[…] The board ruled the union could take limited job action while it sorts out what is and isn’t essential for the corporation, which insures all B.C. drivers. …

Just as the marketplace and capitalism has been mangled by government intrusions and meddling, with the help of the media, public perceptions have become purposefully mangled. And the citizens now turn against corporations, writ large  — instead of more properly turning against the real villain  —  progressive, left-wing government.

Here’s another similar blog entry I wrote a couple years ago:

Vancouver Sun pretends a 100% government-owned division is a “Business”

HOW IS THIS CAPITALIST?

The reported revenue drop notwithstanding, how is this a “business” story?  How does this belong on the “Business” pages of a newspaper? BC Hydro is a giant government division.  A government operation.  It’s 100% government.  Its board of directors are appointed directly by the government —the cabinet, and reports directly to the government.  It is absolutely nothing to do with “business”.  It even has one of those left-wing, authoritarian sounding names:  BC Hydro and Power Authority.

Once again we have an example of either totally confused, useful idiots running the liberal media — one which has been suckered over the years by progressives and other Fabian socialists into thinking that a 100% government “corporation” is actually a business, further blurring the lines between government and the private/business;  or a liberal media which has actually been co-opted into helping blur those lines.

And once again this reminds me of how one citizen, already fully deluded and indoctrinated, was quoted in this same Vancouver Sun, when he decided he needed to sue the 100% government-owned division of the government hideously called the BC Lottery “Corporation”, as saying that his reason for suing that “corporation” was this:  “It’s about keeping corporations honest, that’s really what it’s about.”

It doesn’t end with these three examples. There are hundreds of examples. So many that even you conservative readers’ eyes are now impervious to the progressives’ scam.

Here’s just a couple more of my previous efforts to properly inform you in lieu of an honest media: 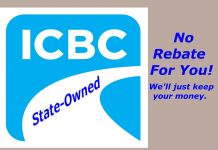 Private car insurers in Canada are offering rebates up to 70%. State-owned ICBC? Squat.