Justin Trudeau is so groovy. It’s a newsy fact.

My. What a difference six years makes in the Canadian liberal media!

Ha ha ha, just kidding. Reading today’s headlines across Canada is just as pro-liberal plain funny as it always has been. Nothing’s changed except the names of their political idols and heroes. Jack Layton becomes Thomas Mulcair. Henry Morgentaler becomes Kermit Gosnell  —  oh hang on, they adored and rewarded Morgentaler with our nation’s highest honor, while being too embarrassed to even mention today’s stories on abortionist Kermit Gosnell  —  but at least their pretense of objectivity and honesty has been maintained!  And Pierre Trudeau becomes Justin Trudeau, etc.

I was onto Justin Trudeau and the liberal-left’s news media division’s fetish about him way back in early 2007 when I uploaded this YouTube video, which is somewhat valuable in that it helps show how if you look at today’s headlines, you can see how nothing’s changed, and the liberals’ media division is still anti-conservative, pro-liberal-left, and is devoid of any semblance of balance or objectivity:
http://www.youtube.com/watch?v=BbXAUVRXkGg

So what do I think about Justin Trudeau being elevated by his party (including the “journalists”), and elected Liberal Party leader this past week?

Sorry what was the question again?

Oh yeah. Well duh he was elected leader of that party. Justin Bieber wasn’t running! And I don’t really care very much, except in a positive sense, in that it really does help define Liberals for what they are cough low-information voters and Paris Hilton fans cough. And I love information such as this being available to Canadians because they can learn from it.

Let’s try a different question: Is this good for Canada? Yes, because again, it helps clarify how so much of the progressive left is about little more than compassless, feel-good symbolics, personality politics, and sophistry, over the empirical, common sense, and principled, concrete solutions inherent in real, authentic, conservative political ideology.

And lest you think I am but an ideological hack totally bent on destroying all that is liberal or progressive, or Trudeau and “Trudeaumania” (well I am somewhat bent on that), let me once again refer you to this nasty bit of Canadian history involving me and my old friend Pierre Trudeau, back in the old century, before I got smart (and with regard to “smart,” I’m not just talking about getting rid of that embarrassing ‘stache). Yes, this is me and Justin’s far more substantial dad back in the bad old days. 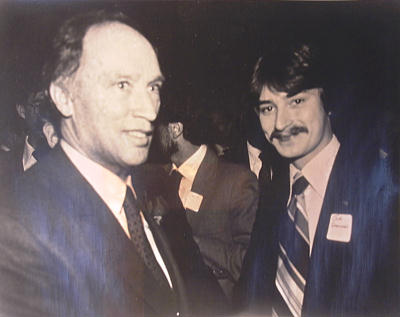 I have grown more substantial in so many ways since then. Not just in girth, but in my capacity to reason and sort out truth and social and economic realities, and life in general, and separate it from the pure, specious, liberal-left, media-aided hypocrisy and utter BS.

The liberals’ media division, on the other hand, has managed to remain the same over the years. Maybe worse actually. For example, Justin’s dad Pierre actually had something smart and original to say, sometimes, but today, just as the Canadians whom the media “inform” every day get dumber with every word read or heard in the mainstream Canadian news media (especially the state-owned CBC), the news media itself  —  which was itself raised and nurtured by the news media of days gone by and from their affiliates in academia and Hollywood  —   has become even dumber.