CBC uses chick click-bait; no doubt because of a lack of government funding

[dropcap]B[/dropcap]ig, big story at the state-owned CBC web site today, as seen at right under their heading “Editor’s Picks.”  Alas, no, it’s not a story about the CBC Editor’s choice for “sexiest babe.” It’s about stomach pain. Duh. Can’t you tell from the photo? 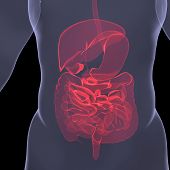 They could have chosen the totally innocuous science-type graphic, like the one at left, which is a photo I found at what was apparently the same web-based source the CBC used to get the picture they chose – a picture which is decidedly not innocuous.

The picture they used did get my attention. And not being completely stupid, I surmise that that was the point. It’s a story which without that picture would be too boring to bother looking at, let alone clicking on. Or which we all might have read at any number of other web outlets.

Crass marketing for a news outfit owned by the state and paid for by taxpayers? Yeah. You bet your boobies. But at last glance, there were 318 suckers readers who commented on that CBC article. (None, so far as I could tell, blamed Stephen Harper for irritable bowel syndrome. Nor did the article or its commenters suggest that “Sarah Palin should take part of the blame.”  I remain shocked.)

The CBC supplemented the marketing of their big, big story with a tweet on one of their 8,000 CBC Twitter accounts of course, as well. This one from their “News” account:

This is what we call click-bait. The state-owned CBC is using click-bait – and almost unrelated photo of (in this case) a sexy babe – to attract readers to their otherwise mundane stories. Chick click bait, to entice readers to their stories, in competition with the private sector. That’s embarrassing for a supposedly serious news organization, owned by the government and paid for by taxpayers on the basis that’s it’s so essential. Don’t get me started on why the CBC sees a need to advertise like crazy, all over the place, just to attract an audience, which if the CBC is so essential, they wouldn’t have to do.

Curious also, I thought, that the state-owned and very left-wing CBC, would buy stock photos of female babes, in particular  – for any news story, ever, no matter how bad or boring or irrelevant their stories are.  I mean I would use pictures like that, sure, but then I don’t run around screaming or insinuating “sexism!” and “war on women!” or other left-wing, PC feminist bromides like that, all day long.  They do.  There were several male pictures available. They chose a sexy female babe.

The picture was, it turned out, more interesting and useful to me than the article. So, being bored, I began my research on the picture, to find one that might be more attuned to the scientific research they wrote about. Since the CBC’s photo was named “stomach-pain.jpg,” that’s the search term I used at Google images.

There are an incredible number of stock photos available for “stomach pain” stories, most all of which were weirdly similar (see gallery below). CBC chose one of the typical “stomach pain” stock photos, which – and this is where the research got even more fun –  in most cases depicts great-looking, young woman, almost universally with nice shloombabas, holding their bellies.

Hey by golly I don’t suppose this is a scientifically-tested marketing ploy designed to aid all those lamestream media news editors who have nothing but boring stupid stories on their publications, which need to be fortified by sexy babes for click-bait. Much.

I do wonder how many women are attracted by that kind of image. And don’t any of their myriad feminazi audience object? I’m guessing the CBC staffer who purchased the picture was a dude. Or one of the females of the 2%.

(And moreover, how bad could their budget problems really be?) 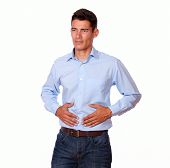 The state-owned CBC got their photo from an online commercial stock photo supplier. They could have chosen the guy at right, who doesn’t feel well in his tum-tum; or these related pictures of the same gal they did use, which I display simply for science. And to mock the CBC. 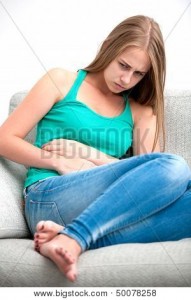 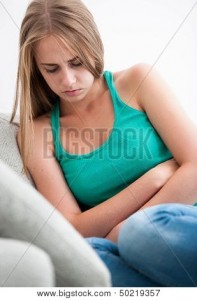 Here’s a small gallery of the other “stomach Pain” photos displayed during my Google search. As I said, there’s obviously a big market for click-bait from supposedly “serious” news journals like the state-owned and ever-so essential CBC.