BC commenter re media report on NDP communist: “…we don’t care about communism in our politicians…”

QMI and related Sun News are the only media bothering to cover the story of a Communist Party of China-linked candidate in the upcoming BC election. It has just been learned, even though the candidate and his party kept it hidden, that he was a member of the Communist Party and worked for the Chinese Communist Party, supposedly until his recent immigration to Canada.

The Chi-Com-linked candidate is Frank Huang. He is now running as a “star candidate”  —  therefore possibly cabinet minister material  —  in the huge BC riding of Richmond Centre for  — can you guess which party?  Well of course it’s the socialist NDP. But don’t worry, silly  —  there’s no “hidden agenda!” This isn’t the Conservative Party we’re talking about!

But at the 24 Hours Vancouver web site, one citizen wrote this in response to their story:

“This isn’t the united states and we don’t care about communism or any other ideology in our politicians….”.

Really. Well that’s weird. I care. A lot. I’d like to think that useful idiot commenter is but an outlier, or at least I pray to God that he is, and that he is not in fact representative of the population. I’m pretty sure the majority of Richmond, BC, which is vastly dominated by immigrants from China, came to this country to escape the ravages of communism in Communist China. So I’m pretty sure they all care about communism. And I’m pretty sure those asses (by which I mean both the commenter and the NDP candidate) don’t speak for them. We’ll find out on May 14 if this Communist Party-linked candidate for the socialist NDP does officially speak for them in government. That will be a telling moment.

But the fact is, the socialist NDP still seem to be generally ahead in the polls. Of course none of the liberal-left mainstream media tend to bother to report stories about the ravages of communism, nor, apparently, about communists in the NDP, nor even about the NDP being socialists  —  choosing instead to hide the truth from us all. So it’s not hard to see why there are people like that commenter out there who, like all of today’s progressives, can glibly write stuff like that, thinking that everybody in the room agrees with him.

Sun News asked for a response from NDP leader Adrian Dix  — a question which, it should be noted, also served the very valuable purpose of informing, under no uncertain terms, the rest of the media 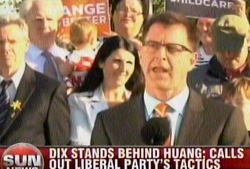 about this Chi-Com story. Sun/QMI asked the question about it in an open media scrum with all of Dix’s lap-dog media right there.

Dix unbelievably defended his Communist Party-linked candidate. Apparently he’s just like the above commenter. And just as all the contemporary NDP politicians do when speaking of their politics and never, ever saying the word “socialist” even though that’s what they are, Dix never said the word “Communist” either, even though that’s what this is about. I dare him or any NDP apologist to say “As a socialist, I support this Huang guy being in our government even though he has very recent Communist Party ties in Communist China.”

Rather, Dix simply pulled an Obama and blamed not himself for his shoddy vetting of Chinese Communist Party-linked candidates (or maybe he did know and likes it?), but rather he blamed the BC Liberals, for causing the revelation of this news; and then, like Obama, attempted to deflect, obfuscate, insinuate, and outright deceive voters into thinking that his opponents  — the BC Liberals in this case  —  are simply some sort of racists. Yes, that’s right, racists. Sounds familiar, right? (Of course he didn’t actually use the words “racist,” either.)

And later, while standing with Huang on a campaign stage, Dix didn’t utter the words socialists or communists when speaking about himself and his guy Huang, or even about the actual facts about this story.

It’s a preposterous lie by Dix. Not only are the BC Liberals obviously, demonstrably not racists, they are only just anti-communist, as the governing BC Liberals continue to grow government and operate numerous state-owned “businesses” in BC. (You can only imagine what the even more socialist NDP would do if they won).

The story  — at least to all of the non-NDP sane-set  —  is the lack of concern from the NDP. Manifestly, their turning a blind eye to communism. In fact, their embrace of it. Well that and their apparent lack of honesty, and transparency, ability to come clean, and whether or not they have an actual “hidden agenda” far worse than any mythical, phantom Conservative “hidden agenda” as ever even imaged by the liberal-left.

But even more emergent, and just as seriously, the sane-set are concerned about the recent security-related findings regarding Chinese Communist Party operatives in Canada and the U.S., by security agencies like CSIS, in Canada, and the CIA in the U.S. and as both our governments and others too, have all enunciated; and as even their icon Barack Obama has read off his teleprompter as instructed. They are spying on us, stealing intellectual property, purposely infiltrating and spying on governments, on our communications, on our various scientific research, on businesses, and on the media among other institutions in our nations.

And here’s a fun fact: it’s not just Huang’s distant past, which the NDP would have you believe he’d left behind long, long ago, in China. The Communist-linked Huang’s BC Conservative Party opponent in Richmond Centre, Lawrence Chen, also an immigrant from China, chimed in. He told Sun News viewers that in fact, contrary to Huang’s argument that Huang quit the Communist Party after moving to BC in 2001, Huang actually wrote for the state-owned Chinese Communist newspaper The People’s Daily (think of it as the Toronto Star if it were state-owned, or the CBC if it were state-ow…. oh hang on…), as recently as 2012. He held out a copy of a 2012 People’s Daily article as proof.

Meanwhile, Lawrence Chen has a much more palatable bio at BCConservative.ca, which reads as follows:

Lawrence completed his education at the University of Technology in Sydney, Australia, earning a Masters degree in Business Administration and he has a background in real estate and political science. He is a former university teacher, published author, and presently works as the BC Wildlife Federation CORE hunting safety instructor and examiner.

Lawrence immigrated to BC in 2000 and became a Canadian Citizen in 2003.

The BC Conservative Lawrence Chen sounds more like someone I’d like to have speaking for me in government, and going to the shooting range with and chatting about freedom and business and capitalism and free markets, than the Communist Party-linked, socialist NDP’s Frank Huang. In fact, as a Canadian, I would hope that all Canadians do “care about communism in our politicians,” and about having a Chinese Communist Party-linked guy as a member of any government in Canada. As I said, we’ll see.

Previous articleMischa Popoff to run as an independent now, after BC Conservatives bull-poop on him
Next articleIn a totally new twist, I have been asked why I don’t just move to Texas.